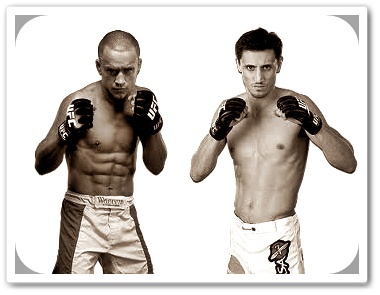 The UFC 154 event will feature a featherweight bout between Mark Hominick and Pablo Garza that will set off the main card PPV on Saturday night in Montreal. Both fighters are coming off multiple losses and could very well be fighting for their UFC future. Let’s see how this one breaks down.

Pablo Garza (11-3) is coming off the unanimous decision loss to Dennis Bermudez at the UFC on FOX 3 event in May. In fact, Garza has lost back-to-back fights with his last win coming at UFC 129. Garza has won two fights via TKO/KO and seven fights via submission. He’s been submitted in two of his three losses.

Mark Hominick (20-11) is coming off the split decision loss to Eddie Yagin at UFC 145. Hominick was bombarded with heavy shots in the fight, only to come on strong towards the end but it wasn’t enough. Hominick has lost three consecutive fights for the second time in his career, with the first of the three being his unanimous decision loss to Jose Aldo in his title fight. He has won nine fights via TKO/KO and seven fights via submission. He has been submitted five times and finished via TKO/KO three times in his career while winning “Fight of the Night” three times.

I think it’s safe to say that both fighters are fighting to stay in the UFC, and it’s hard to predict how fighters will perform when their backs are against the wall. Hominick is clearly the more experienced fighter that’s fought much stiffer competition. Garza is the larger fighter who’ll also have a sizable reach advantage on the feet.

Hominick clearly wants to keep the fight on the feet even though he’ll be giving up the reach advantage. He’s adept at using footwork to create angles to fire off his technical punches. He’ll probably key everything off his jab and then take what Garza gives him. I also think that Hominick is the more well rounded fighter since Hominick is versed in submissons as well.

Garza seems like he’s more of a submission guy. Dennis Bermudez threw him around like a rag doll in their matchup, but what can you expect when Garza’s nickname is “The Scarecrow”. Hominick hasn’t been submitted since 2008, and I have a hard time seeing Garza having success in doing that. He does have long limbs which can make things tricky should the fight go to the ground.

I expect Hominick to keep it standing and outpoint Garza to take the unanimous decision victory.