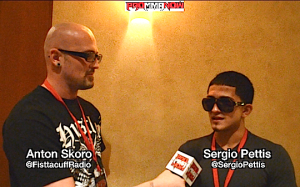 ProMMAnow.com (www.prommanow.com) reporter Anton Skoro caught up with Pettis following the bout to get his thoughts on his performance and what happens next.

Pettis indicated he got away from his game plan a bit, did not use enough head movement in the fight and ended up taking more punishment than he wanted, hence the shades.

Now 6-0, and especially with him being the brother of UFC lightweight contender Anthony “Showtime” Pettis, the obvious train of thought is how far Sergio might be from a shot inside the UFC Octagon. But at only 19-years-old Pettis pointed out he is still young, has plenty of time and just wants to keep improving.

Pettis also discussed when he thinks he might like to get back inside the cage, the pressure that comes with wanting to remain undefeated and what type of meal he wants to celebrate with.

You can keep up with Sergio Pettis on Twitter at @SergioPettis, Resurrection Fighting Alliance on Twitter at @RFAfighting and Anton Skoro at @FisttacuffRadio.