Pro wrestling’s Rob Van Dam on his love of MMA: ‘It’s the only sport I watch’ *VIDEO* 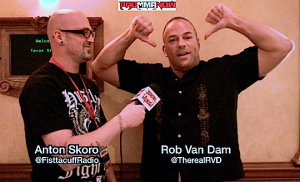 RVD talked about his love of mixed martial arts:

“Actually it is the only sport I watch. It really is. I can’t hold a conversation with anything else. If someone wants to talk basketball, football, soccer, golf — even wrestling — I actually don’t even watch wrestling. It’s my job, you know; unless I’m there at the arena watching. But MMA, I can’t name all the fighters, I’m not like one of those hardcore guys, but I really enjoy the whole competitive spirit I see when I watch it. I’m a big fan.”

RVD said he rolls around once in awhile with his buddy UFC veteran Justin McCully. In addition, he has trained in martial arts over the years and attributes this to the style he uses inside the pro wrestling ring.

As far as if RVD would have gone into MMA if it was as big now as when he was growing up, the 41-year-old  entertainer was very clear:

“If it was ever around when I was like 18, there’s no doubt about it. I used to kickbox and nobody even knew what kickboxing was back then. I would have to tell people, and they didn’t understand it. But I was good at it and really enjoyed it and I was kind of at a fork where I went to wrestling school and I was kickboxing. I entered a tough-man contest … I got runner-up. I just got out of high school and was feeling really good and was like maybe I’ll go pro with this, but wrestling took off for me. So MMA wasn’t around until much later, so here I am a big fan.”

You can keep up with Rob Van Dam on Twitter at @TherealRVD and on his website www.RobVanDam.com.

One thought on “Pro wrestling’s Rob Van Dam on his love of MMA: ‘It’s the only sport I watch’ *VIDEO*”