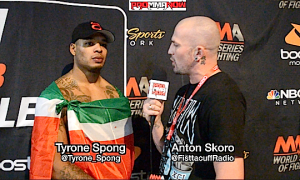 Tyrone Spong is one of the baddest men to ever step inside the ring. Touting a pro kickboxing record of 68-6-1, 1 NC and with 42 wins coming by way of knockout, Spong made his official transition into professional mixed martial arts at the inaugural World Series of Fighting event held at Planet Hollywood in Las Vegas on November 3.

Broadcasting live on NBC Sports Network and fighting at light heavyweight, Spong took on Maine’s Travis “The Showstopper” Bartlett, a former boxer who made the transition to MMA in 2007. Barlett came into the bout with Spong with a pro MMA record of 6-3 with five of his wins coming by way of knockout.

To make a short story shorter, the 27-year-old Spong looked absolutely flawless. It was as about a perfect pro MMA debut as anyone could ask for and ended with Spong stopping Bartlett with a straight right hand 3:15 into the first round (read ProMMAnow.com’s play-by-play of the fight).

ProMMAnow.com (www.prommanow.com) reporter Anton Skoro caught up with Spong after the bout to get his thoughts on his performance and where he goes from here. Spong also discussed how working with the Blackzilians and Rashad Evans helped foster his desire to make the move from kickboxing to MMA. He also talked about when we might see his first win via submission and how soon he would like to get back inside the cage.

Stay close to ProMMAnow.com for more on-scene interviews from World Series of Fighting.

You can keep up with Tyrone Spong on Twitter at @Tyrone_Spong, World Series of Fighting at @MMAWorldSeries and Anton Skoro at @FisttacuffRadio.