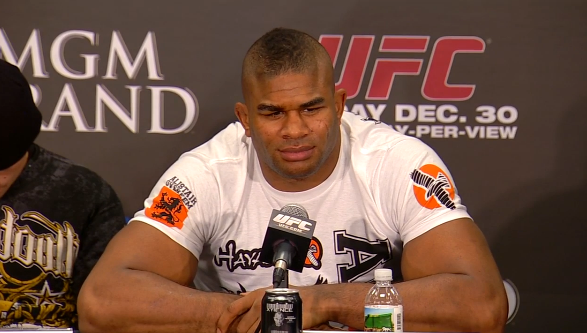 Well, Super Bowl weekend and UFC 156 just got a whole lot bigger as heavyweights Alistair Overeem and Antonio “Bigfoot” Silva are set to do battle.

UFC officials confirmed the news via Twitter on Tuesday, but also explained that the bout was pending Overeem receiving his license to fight from the Nevada State Athletic Commission.

Overeem (35-11, 1NC) hasn’t fought since dismantling Brock Lesnar last December via TKO in the very first round. Overeem was scheduled to fight Junior dos Santos in May for the UFC heavyweight title, but was pulled from the bout because of elevated testosterone levels stemming from the bout with Lesnar. Overeem will be able to reapply for license in December 2012.

Silva (17-4) is coming off a first round TKO win over Travis Browne in October. Silva landed a huge right hand that put Browne away after Browne apparently suffered a leg injury early in the fight. It was a much needed win for Silva who had suffered back-to-back first round TKO losses to AKA teammates Daniel Cormier and Cain Velasquez.

UFC 156 is set to take place on February 2nd in Las Vegas, Nevada, and will be headlined by the UFC featherweight title fight between Jose Aldo and Frankie Edgar. Also featured on the card will be a light heavyweight match up between Rashad Evans and Antonio Rogerio Nogueira.