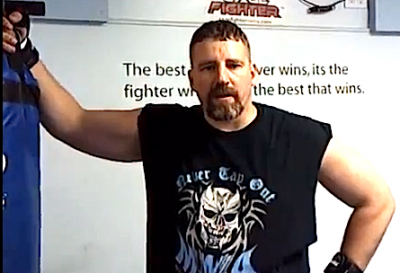 Batista is fresh off a win in his pro MMA debut against Vince “El Marro” Lucero which brought a lot of criticism, but Shaddock believes the criticism is unjust.

He sees Bautista as a worthy opponent who trained hard to face Rashid “Smash” Evans, only to have Lucero substituted at the last minute due to Evans’ arrest on a parole violation. Shaddock insists he bears no animosity towards Bautista. He stated they are “both experienced in MMA” and “it would be cool to fight against him.”

At 6’5” and 280 pounds, Bautista is a beast of a man. He owns a Cesar Gracie affiliate gym in Tampa, Fla., where he also trains. Kamal “The Prince of Persia” Shalorus, Bautista’s friend, has been trying to convince him to sign on to the fight.

Shaddock, 5’5” and 255 pounds, is no light-weight. He is a former golden gloves boxer and has been involved with combat sports since he was 3. He made his move into Haijin Ryu Jiu Jitsu, in which he holds a purple belt, at the age of 39 after a lifetime of training in wrestling and various other disciplines. He owns his own gym in Carroll County, Maryland where he trains daily and personally mentors each of his fighters.

Shaddock would like to have Bautista step up before he signs with anyone. He trusts he has something to offer the fans and Bautista as a veteran fighter. He has watched Bautista’s fight and believes the important thing in a bout against him would be to remain standing.

Shaddock stated, “My specialty is standing up. I believe I would also have an advantage on the ground, but a guy that size you just do not want on top of you.”

Shaddock is also vying for a position on the reality television show Warrior Island. To vote for him go to his Facebook page or give him a thumbs up on the video below. The top 16 fighters with the most votes will be taken to the island.