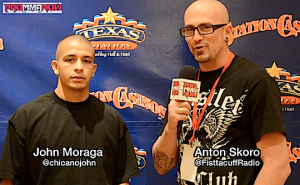 ProMMAnow.com (www.prommanow.com) reporter Anton Skoro caught up with Moraga over the weekend at Resurrection Fighting Alliance 4 in Las Vegas.

He was on hand to support his MMA Lab teammate Efrain Escudero, who faced Tyson Griffin in the RFA 4 main event. Moraga shared his thoughts on the match-up and how training has been going at the MMA Lab and Arizona Combat Sports.

Moraga also gave some insight on when he will make his return to the UFC Octagon, how he is enjoying the time off and how life has changed since recently having a second child.

One thought on “Interview: Catching up with UFC flyweight John Moraga *VIDEO*”