A fired up Kevin Randleman rips on excuse makers; plans for a 185-pound return *VIDEO* 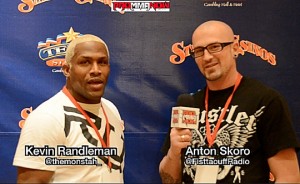 A former two-time Ohio State Division I wrestling champ, Randleman discussed his role as coach and how helping the young guys also helps to keep him focused.

Although he is coaching now, the 41-year-old Randleman also made it clear he has not retired from pro MMA competition, can fight at 185 pounds and is ready for anyone, anywhere, anytime.

Randleman said he is healthier than he has been in 14 years, is training in all aspects of MMA and no longer smokes or drinks. He also gave some insight on where he will fight when he makes his return to competition:

“I’m going to call home whoever calls me first. And whoever calls me first is going to get one resurrected [expletive] that really is devoted… first and foremost I’m devoted to being the best possible person that I can be. … I guarantee you that my first fight back at whatever weight class, I will bring it just like I used to.”

Finally, “The Monster” goes off on those who tend to make excuses after losing and gives some advice to the up-and-comers:

“If you get in the ring, there’s no complaining after you get your ass whooped. That’s it. You got in the ring. Say no in the first place. But when you get in the ring, you’re in the ring to fight. I don’t want to hear you complain Tito after it’s over that, ‘Oh, I tried to do my best.’ [expletive] that! Don’t fight! I’m sorry. I’m sick of hearing complaints. You young kids understand this, it’s a privilege to be in this sport. Everyone wants to be in here and make that big dollar. I wish it was a perfect world and we could, but it’s not. I’m not gonna make big dollars coming back cause I don’t deserve it. But I’ll earn it. I’ll earn it just like every rookie coming up now. And I won’t complain about who the [expletive] they want me to face.”

7 thoughts on “A fired up Kevin Randleman rips on excuse makers; plans for a 185-pound return *VIDEO*”