UFC on FX 6: Mike Pierce steps in for Kyle Noke against Seth Baczynski 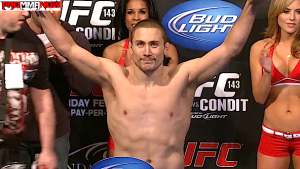 A new bout has been formed for the UFC on FX 6 card as replacement Mike Pierce (15-5) now faces Seth Baczynski (17-6) after Kyle Noke (20-6-1) withdraws due to an injury. The event is set to take place at the Gold Coast Convention and Exhibition Centre in Broadbeach, Gold Coast, Australia, on Dec. 14.

UFC on FX 6 will feature a headline bout between “TUF: The Smashes” coaches Ross Pearson and George Sotiropoulos who will engage in a lightweight battle. The main card will air LIVE on FX with the prelims set to air on FUEL TV.

Mike Pierce is currently riding a two fight winning streak, most recently defeating Aaron Simpson via second round KO at UFC on FX 5 earlier this month. Prior to that he scored a unanimous decision victory over Carlos Eduardo Rocha at UFC on FX 3 in June, bouncing back from a split decision loss to Josh Koscheck at UFC 143 in February. Pierce will no doubt look to extend his winning streak to three with a big performance in December.

Meanwhile, Seth Baczynski has won his last six fights in a row, most recently defeating Simeon Thoresen via first round KO at UFC 152 in September. Prior to that he scored a decision victory over Lance Benoist at UFC on FX 3 in June, and picked up a second round submission win over Matt Brown at UFC 139 in November 2011. Baczynski now has the chance to put another notch in the win column by defeating Pierce.