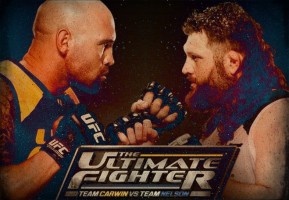 A new bout has been added to the TUF 16 Finale as John Cofer (7-2) faces Mike Rio (8-1) in a lightweight match-up. The event is set to take place at the The Joint – Hard Rock Hotel and Casino in Las Vegas on Dec. 15.

The Ultimate Fighter 16 Finale will feature a headline bout between coaches Shane Carwin and Roy Nelson who will engage in a heavyweight showdown. The main card will air LIVE on FX with the prelims expected to air on Facebook and FUEL TV.

John Cofer last fought at “The Ultimate Fighter 15 Finale” in June, where he dropped a third round KO loss to Justin Lawrence in a bout which earned “Fight of the Night” honors. Prior to competing on the “TUF: Live” reality show, the 28-year-old had built up a four fight winning streak, defeating notable fighters such as Harry Johnson, Ryan DeRocher and Marius Cujba during 2011. Cofer will no doubt look to pick up his first UFC victory with a big performance against Rio.

Mike Rio also appeared on the “TUF: Live” reality show, where he was eliminated by Andy Ogle and later suffered an injury which prevented him from competing at the live finale in June. His last professional bout was against John Ortolani at CFA 4 in December 2011, where he scored a first round TKO victory. Prior to that he defeated Zach Juusola via first round TKO at CFA 3 in October 2011. Rio now has the chance to score a big win in his UFC debut and extend his winning streak to three.

2 thoughts on “John Cofer vs. Mike Rio added to The Ultimate Fighter 16 Finale on Dec. 15”