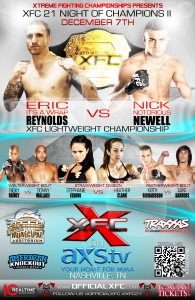 XFC 21: Night of Champions II is set to be the promotion’s biggest event of the year and will feature a lightweight championship fight between Nick Newell and Eric Reynolds in the main event. Both fighters have put together three consecutive wins in the XFC cage, and are now headed to Nashville, Tennessee, for the biggest fights of their careers live on AXStv.

Newell was last in action at XFC 19 as he took out David Mays in devastating fashion via TKO. Newell accepted a fight with Reynolds after his XFC 19 win, but Reynolds risked losing the opportunity to fight for the title when he decided to take a fight against Lorenzo Borgomeo. Reynolds went on to submit Borgomeo in the second round to set up the December showdown.

The XFC 21 co-main event will consist of a welterweight bout between Corey Hill and Ryan Thomas. Fans may remember Hill from season five of The Ultimate Fighter, in which he made it to the quarterfinals before losing to UFC lightweight contender Nate Diaz.

Meanwhile the American Top Team product, Ryan Thomas, has only had two fights in his career go decision, recording all of his wins by  TKO or submission. Hill enters the matchup with a significant reach and technical grappling advantage, but Thomas’ size and experience, having fought in the UFC and Bellator prior to signing with XFC, should more than offset Hill’s wrestling pedigree in what looks to be an exciting contest unlikely to go the distance.

A women’s feature bout will take place between XFC veteran Heather Jo Clark and Stephanie Eggink that will air on the main card. Clark is coming off an XFC 18 submission win over Avery Vilche. Eggink is looking to rebound off a KO loss in his last matchup against Kaline Medeiros.

Three fighters fighting out of Charlotte, North Carolina, will be making their second XFC appearance at XFC 21. Featherweight Keith Richardson, lightweight Kevin Forant, and welterweight Ricky Rainey will all be doing battle on December 7th.

Richardson will look to keep his momentum going when he takes on the undefeated Luke Sanders. Richardson dominated Lawson McClure at XFC 19, winning via submission and inked a long term deal with the promotion. Sanders will be fighting in front of his home crowd in Tennessee after taking out Zach Sanders at XFC 18. Luke Sanders and Keith Richardson will start the AXStv broadcast portion of the event with fast paced, hard hitting, action from the Featherweight division.

Forant will look to capitalize on his first XFC win when he takes on XFC open tryout winner Jason Hicks. Forant was able to take a unanimous decision win over the always tough Joe Elmore. Hicks made his debut with the XFC in 2010, following a successful showing at that year’s Open Fighter Tryout. He quickly put his opponent away to earn a multi-fight contract and hasn’t looked back since. Now at 5-0 and a perfect 2-0 inside the XFC cage, “The Ronin” could be just a fight or two away from challenging the winner of the XFC 21 main event.

Rainey will look to bounce back from a KO loss in his XFC debut against Johnny Buck. It was a fight that Rainey was dominating before getting careless during one of the punching exchanges, allowing Buck to put him away with punches. Rainey will be taking on Donny Wallace in a welterweight matchup. Wallace is a three time XFC vet, with a promotional record of 2-1 including a victory over a Jason Blackford at XFC 18. Wallace is a seasoned fighter with professional bouts dating back to 2008.

XFC 21 will air LIVE on AXStv with the broadcasting beginning at 9 p.m. The main card bouts are below:

Stay tuned to ProMMAnow (www.prommanow.com) for more XFC 21 coverage and fight announcements for the preliminary card that will begin at 7:15 p.m.