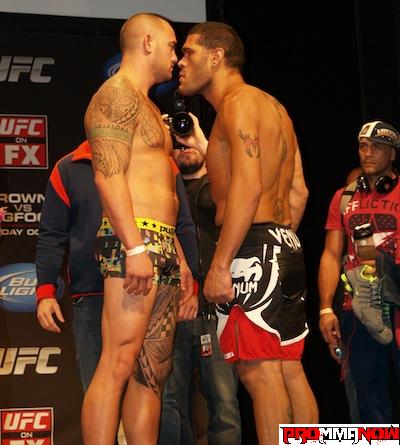 Antonio Silva capitalized on an apparent knee injury suffered by Travis Browne to earn a devastating first-round TKO stoppage to even up his UFC record at 1-1. Just as importantly, the win which came at 3:27 of the first round, stopped a two-fight skid for “Bigfoot.”

Browne came out loose, throwing a variety of kicks and winging overhand rights to start the bout. After Silva clinched and looked to rough Browne up in close on the cage, “Hapa” was warned for illegally grabbing the cage to prevent a takedown.

After the break, Browne wobbled on his left leg while throwing a punch over the top. As Browne looked to adjust to his injury, Silva came forward and connected with a right hand that dropped “Hapa” against the cage. A flurry of hammerfists put the finishing touch on an impressive performance by Silva.

The win for Silva (17-4 MMA, 1-1 UFC) marks his first victory since his improbable finish of heavyweight legend Fedor Emelianenko, snapping his two-fight losing streak after back-to-back losses to Daniel Cormier and Cain Velasquez.

In a rematch five years in the making, Jake Ellenberger avenged his first pro loss, using his takedowns to edge a very game Jay Hieron by unanimous decision.

The first round saw both fighters feel each other out as Ellenberger started much more cautiously than usual. Hieron used his jab and kicks to score early as Ellenberger avoided a couple of single leg attempts and countered over the top with punches in a very close first round.

Ellenberger secured a takedown in the second and used his dominant positioning to land elbows from the top to inflict the most damage either guy could muster in the fight. A bloodied Hieron was able to create enough space to stand and continue his stand up assault, but the second frame belonged to Ellenberger.

Hieron fought with a sense of urgency in the third round, clearly being the aggressor as both fighters looked to end strong in a very close fight. Ellenberger managed a late takedown that may have swung the scorecards in his favor although Hieron quickly bounced back to his feet sustaining no damage. A back-and-forth last minute saw both fighters landing mostly one-and-done attacks.

In the end, Ellenberger (28-6 MMA, 7-2 UFC) would be awarded the unanimous decision victory with scores of 29-28 across the board.

After a tentative start, John Dodson finally found his magic in the second round. A body shot by Dodson set up a brutal left hand that marked the beginning of the end for Formiga, which officially came at 4:35 of the round.

A fairly uneventful opening frame saw John Dodson land his jab and strikes to the body as Formiga failed to earn a single takedown. As boos erupted from the crowd, Dodson continued to land to the body while Formiga managed to land only in counter situations. The boos continued as the fighters took their corners to end the first round.

The second stanza looked much the same until John Dodson landed a left hand that put Formiga on the mat. Dodson cautiously went for the finish landing some strikes, while avoiding the dangerous guard of Formiga. After the restart, Dodson used a punishing body shot to set up another clipping left hand that sent Formiga reeling to the canvas. This time he pounced, following Formiga to the ground and dropping a flurry of hammerfists to his downed opponent, prompting the referee to stop the fight.

John Dodson (14-2) improves his UFC record to a perfect 3-0, and the victory for the TUF 14 winner sets up a date with “Mighty Mouse” for a shot at Johnson’s UFC flyweight title.

Justin “Fast Eddy” Edwards lives up to his name

Justin Edwards needed less than a minute to even up his UFC record at 2-2 with a 45 second submission win over Josh Neer.

Edwards came out fast, landing a quick combination of punches to start the bout. He quickly clinched and looked to take the fight to the mat but it was Neer that was able to reverse as it appeared that “The Dentist” would earn the first takedown of the fight. Instead, Edwards cinched up a tight guillotine before the fight hit the ground, and before Neer could tap, he found himself unconscious on the mat.