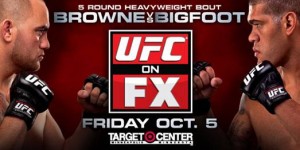 The UFC on FX 5 event will take place on Friday night at the Target Center in Minneapolis, Minnesota, and will be headlined by the heavyweight bout between Travis Browne and Antonio “Bigfoot” Silva.

This will be the second consecutive UFC event headlined by heavyweights looking to break into the contender bracket of the heavyweight division. It’s actually a pretty deep card for an FX show, and we should see some entertaining fights on Friday. However, there are three huge questions going into this event that people should be on the lookout for on Friday. Here we go:

Will Travis Browne finally become a legitimate contender in the heavyweight division with a win over Bigfoot?

Browne (13-0-1) is coming off the submission win over Chad Griggs at UFC  145. We’ve seen Browne go up against a proven UFC veteran in Cheick Kongo and that fight ended in a unanimous draw. We’ve yet to see him defeat an upper tier heavyweight unless you want to through Stefan Struve in that bunch after his win over Stipe Miocic. I don’t consider Struve a top ten heavyweight yet. However, he’ll be facing his toughest test in the form of Antonio “Bigfoot” Silva (16-4) who was the first man to legitimately stop the legendary Fedor Emelianenko via TKO. Silva has gotten destroyed in his last two fights since the Emelienenko fight by both Daniel Cormier and Cain Velasquez. There’s no shame in losing to either of those AKA products, but Silva was once a top ten heavyweight who is still a threat to most heavyweights out there. He’s huge with decent power and a very good ground game. Browne will have his hands full, but a win here could vault him up from the current #10 ProMMAnow ranking.

Will John Dodson put himself on the fast track to a UFC flyweight title shot?

Demetrious Johnson just became the inaugural UFC flyweight champion with his win over Joseph Benavidez at UFC 152. He has already beaten Ian McCall as well, so there’s a need for future contenders to develop quickly to take on Johnson. The next challenger could come in the form of TUF 14 winner John Dodson. Dodson (13-5) will be taking on the relatively unknown Jussier da Silva (14-1) who ProMMAnow has ranked as the number four flyweight in the world. We have Dodson ranked at number eight for reference. Dodson is a charismatic fighter with very good skills and a win over da Silva would certainly vault him up the division ladder quickly as it would also be his third consecutive victory in the UFC. Dodson may be the only flyweight out there capable of matching Johnson’s speed which would make for a very exciting fight.

Will Michael Johnson take that next step in his career with a win over Danny Castillo?

Michael Johnson (11-6) impressed me tremendously in his last fight against TUF 13 winner Tony Ferguson. Johnson has won back-to-back fights and is now (3-1) in the UFC with the lone loss coming against submission ace Paul Sass. However, Johnson just looked like a different fighter in the Ferguson fight. He displayed patience, improved striking game, and a good chin against a guy with power in his hands. Johnson is still very young at 26 years old and seems to finally be hitting his stride in his career. He has very good takedown defense(86%) and will probably need it as Castillo (14-4) will look to take the fight to the ground if he gets into trouble on the feet. He loves to grind his opponents down and take the decision win, so this should be a good measuring stick for Johnson.

There are several other good fights to be on the lookout for as well. It’ll be interesting to see if Jake Ellenberger can avoid back-to-back losses while trying to avenge an earlier loss against Jay Hieron. Yves Edwards taking on Jeremy Stephens should be a fun fight to watch as well. Be sure to join us for live coverage on Friday night if you are unable to watch the TV broadcast.

12 thoughts on “Three huge questions going into UFC on FX 5: Browne vs. Bigfoot”