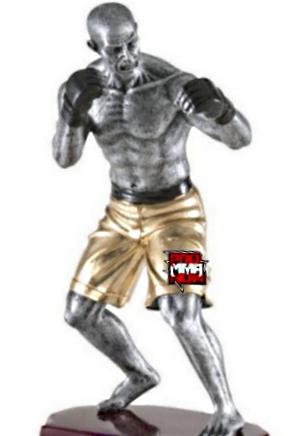 Each month here at ProMMAnow.com we will be acknowledging the most impressive performances of professional mixed martial arts fighters.

From the UFC to the regional and local level, if there is a fight, knockout or submission that you think deserves to be on our list, let us know about it on our Awards page. At the end of the year we will select the best of the best from each category for our year-end awards.

For the month of September, these are the performances that stood out to me. Hands down, the best submission I saw all month was Jeff Rexroad‘s modified triangle submission win over Lucas Pimenta at Legacy Fighting Championship 14.

The best MMA fight I saw all month was T.J. Grant vs. Evan Dunham at UFC 152. Grant ended up winning the unanimous decision, but it was an exciting back and forth bout that earned them each a $65,000 “fight of the night” bonus from the UFC.

During the first round of Alex Emelianenko’s fight against Konstantin Gluhov at M-1 Challenge 34 this past weekend, I thought it might be in the running, not only for fight of the month, but fight of the year.

However, Alex ended up putting him on the ground in rounds two and three and it slowed the pace down drastically, but that fight gets a notable mention.

The hardest category to pick this month is knockouts. UFC 152 had two great knockouts. Seth Baczynski‘s first round left hook KO of Simeon Thorensen — where he fell face first to the canvas — and Cub Swanson‘s first round overhand right KO of Charles Oliveira, were both spectacular.

Also, Brad Pickett‘s first round right hand uppercut knockout of Yves Jabouin at UFC on FUEL TV 5 is also among the nominees.

After re-watching each of these fights, I have to go with Pickett. It was one punch and he followed it up with a diving hammerfist similar to Dan Henderson’s diving forearm smash of Michael Bisping. However, Jabouin was already out from the uppercut. Absolutely brutal. The KO earned Picket an extra $40,000 for “KO of the night”.

There you have it folks, to summarize:

Now we want to hear from you. Do you agree or disagree with my choices? Submit your own favorites, and in the future, when you see an awesome KO, submission or fight, nominate it for our monthly ProMMAnow.com awards. See ya next time!