The staff here at ProMMAnow.com (www.prommanow.com) have weighed in with their picks for UFC on Fuel TV 5: Struve vs. Miocic. This event takes place at the Capital FM Arena in Nottingham England. The heavyweights Stefan Struve and Stipe Miocic square off in the main event to help determine some of the pecking order in the division.England’s very own Dan Hardy, Paul Sass and John Hathaway have big fights but will the home field advantage help them all notch wins? We test our skills and here is how we see these fights going. 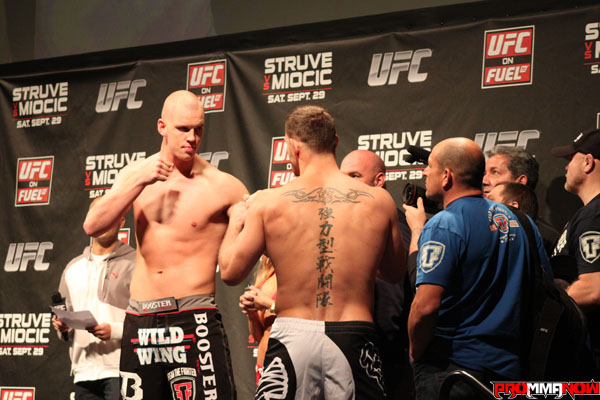 JAY CEE: Stefan Struve is currently on a three fight winning streak and looks better every time we see him. He has the ability to knock opponents out and submit guys on the ground. Most of his career losses have come via knockout or TKO, so he will need to avoid Stipe’s heavy hands and elbows. Miocic is undefeated and knows how to finish fights, if he can get past Stefan’s reach advantage and find success with his striking then he can win this fight. However, if Struve can get the fight to the ground then we could see a submission on the cards. Stipe Miocic by KO

JACK BRATCHER: Struve’s height, length, durability and overall well-roundedness should give him the advantage here. Miocic may have the power advantage and the wrestling advantage but it’s going to be hard for him to get inside to use that power, and if he does take it to the ground he stands a good chance of getting submitted. This is by far Miocic’s toughest test to date. That is not the case for Struve. Struve via submission.

GARY THOMAS: Struve’s may give Miocic some fits at first but I don’t see the Skyscraper’s chin holding up in this fight. Stipe has some power behind his punches and that will ultimately be the downfall of Struve. Miocic byTKO.

JAN GAETJENS: I give the advantage on the feet to Miocic, or rather, I would give him the advantage if he could somehow grow an extra foot in the next couple of days. Struve will be able to control the spacing and distance of the fight, force Miocic to turn the fight into a wrestling match, and use his spider monkey-esque legs to work for a triangle or armbar finish off of his back. Struve by submission. 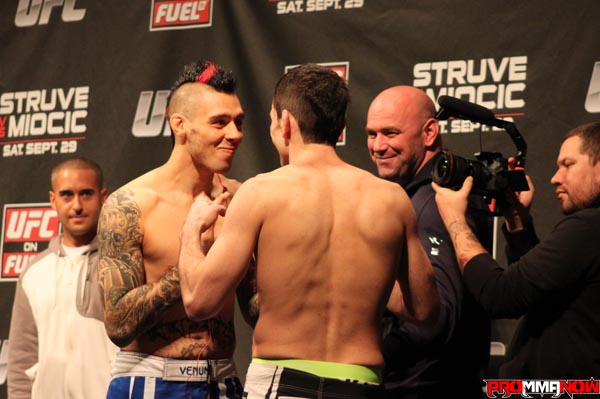 JAY CEE: Dan Hardy, on home soil, in his hometown, means one thing…KO!!!….Dan seems really focused at the moment and is coming of a big win over Duane Ludwig at UFC 146. Sadollah is good at physically picking his opponents apart and has some striking and leg kicks, but I do not think Hardy will allow the fight to get far enough for that to take effect. If Dan can connect with his heavy hands, successfully implement his counter striking and avoid any take-down attempts then I think we will see a quick finish. Dan Hardy by KO.

JACK BRATCHER: Hardy has a big power advantage and if these guys go toe to toe, I think it will be a short night for Sadollah. Hardy via TKO.

GARY THOMAS: Hardy has to be jacked to be fighting at home and stylistically this is a good fight for him. His striking will be too much for Amir Sadollah and he will finish the fight before the bell for the third round. Hardy by KO.

JAN GAETJENS:  I can no longer allow myself to be an Amir Sadollah apologist. When he first burst onto the scene on The Ultimate Fighter, I definitely bought into the hype, but six years later all that potential has not panned out. Dan Hardy’s struggles in 2010 and 2011 proved that he isn’t quite at the point where he can beat guys at the top of the welterweight division, but Sadollah should be a relatively easy out for the Brit. Hardy by TKO (bonus prediction: he will partially credit his victory to his life changing psychedelic ayahuasca vision quest, and Joe Rogan will love it). 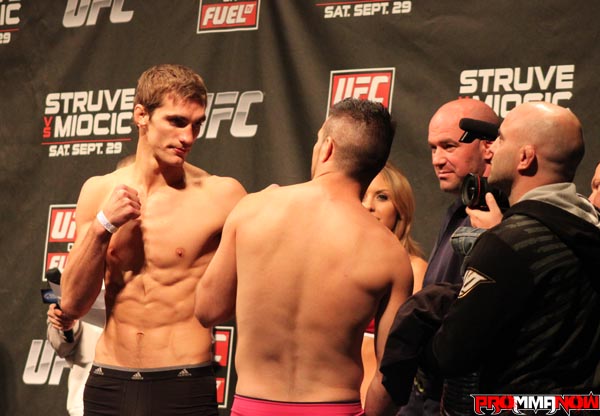 JAY CEE: This is a very interesting fight and a great matchup. I personally think it will be very close as Hathaway is well rounded with some nice stand up and Maguire has a good ground game with some solid striking. I think this fight will be a back-and-forth battle that could go the distance, so whoever can implement their game plan and control the fight will come out on top. Hathaway may look to pick apart Maguire with his striking, but if Maguire can score some take-down’s and secure a dominant position on the ground he will make things difficult for Hathaway with his “Gypsy Jiu-Jitsu”. It have a feeling that it will be a close one. Maguire by decision.

JACK BRATCHER: This should be a fun fight. Both guys are on a tear. Hathaway has faced and beaten the tougher competition and I have to believe at this point in their career he is going to be too much for Maguire. Hathaway via decision.

GARY THOMAS: Not sure this will be fight of the night but I do believe we will get three hard rounds out of these guys. Hathaway is tough and has been in some good fights and Maguire has solid ground work. Toss up on this but if i was betting the farm I would to the way of Hathaway. Hathaway via decision.

JAN GAETJENS: Maquire is going to have to go to the ground if he wants to have a chance at winning. Maguire has a slick ground game, but I like Hathaway to use his length to smother him from the top with heavy hands and elbows and grind out a safe decision. Hathaway by decision. 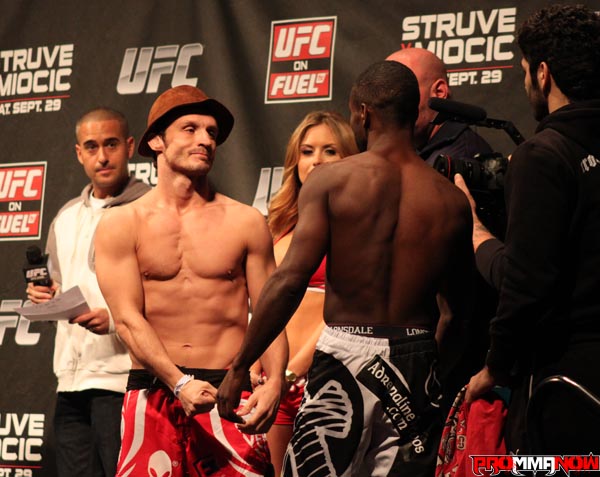 JAY CEE: Brad Pickett is dangerous in all areas and can adapt well to various situations in a fight. Jabouin has great striking and will prefer to stand and exchange. Yves is not known for his ground game and submissions, whereas Pickett has finished many opponents on the mat. If Brad can avoid getting hurt by Jabouin’s striking, get the fight to the floor and take control then I can see him picking up the submission victory.Pickett by Submission

BRIAN FURBY: Pickett by submission in Round 3

JACK BRATCHER: I foresee Pickett standing with Jabouin until he decides to put him on the ground and lock up a submission victory (or win a decision). Jaboin via submission or decision.

GARY THOMAS: Yves is solid and poses a threat to Pickett in the stand up game. My hopes are that this stays standing and the crowd gets its moneys worth. If it goes to the ground it could be better shot for Pickett. Jabouin by decision.

JAN GAETJENS:  I’m breaking my “never pick against Haitians” rule this time. Jabouin is just too one dimensional for me to take him here. Pickett may not have the same technical striking prowess on his feet, but he’s skilled enough to hold his own and trade with Jabouin long enough to take him to the ground. Pickett by decision. 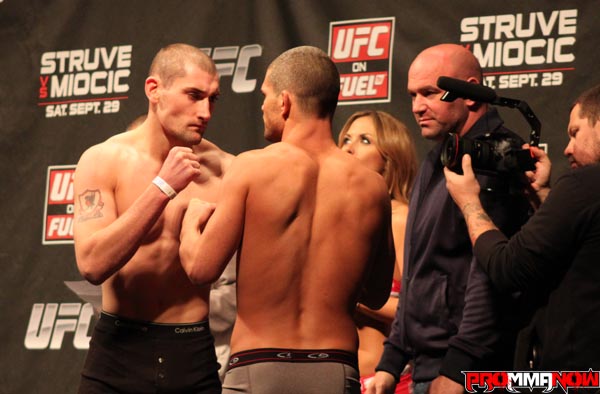 JAY CEE: Paul Sass has cemented his reputation as a submission specialist, so you can only expect him to look for the sub in this fight. Matt Wiman is a good all-rounder and has picked up fight of the night on multiple occasions. I think it would be wise to point out that a high percentage of Matt Wiman’s fights tend to go the distance, but all of Paul’s bouts in the UFC have ended in the first round. If Wiman can remove Sass from his comfort zone and take him into the second and third rounds then he could land the decision victory, but if an early submission opportunity arises for Sass then that could be all she wrote. Sass by submission.

BRIAN FURBY: Sass by submission in Round 1.

JACK BRATCHER: I love crazy fights like this. Sass is 13-0, 12 wins by submission, one win via decision. Matt Wiman is 14-6 but has never been submitted even though he’s faced some very good submission artists. I like Wiman here to stop the streak via TKO.

GARY THOMAS: Sass has so much talent and to this point is a finishing machine. Wiman is tough but I don’t think he will be able to mount much of an attack in this one. Sass by submission.

JAN GAETJENS:  Wiman likes to close distance and grapple, but Sass is the better finisher on the ground. I’m looking for the submission streak to stay alive. Sass by submission. 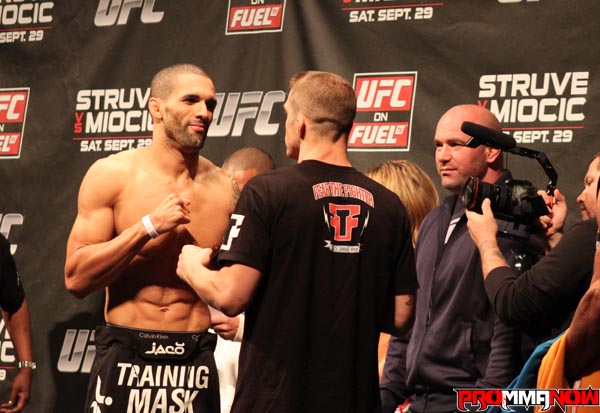 JAY CEE: Che Mills will be out to prove that he belongs in the UFC with a big performance in this fight. Che made his UFC debut fighting in the UK and scored an impressive first round knockout over Chris Cope, and there is no reason why he cannot repeat that on Saturday night. Both of these guys prefer to stand and strike, so I think whoever can find their range first and take control of the fight from the offset will hold the advantage. Ludwig is always dangerous and known for his knockout ability, after back-to-back losses he really needs a win and sometimes that can bring out the best in a fighter. Che Mills by KO.

BRIAN FURBY: Ludwig by KO in first round.

JACK BRATCHER: Ludwig has won only 2 of his last 6 bouts. That’s not good. Che is coming off a TKO loss to Rory MacDonald, which is nothing to be ashamed of. He had won five in a row before that. Che Mills via decision.

GARY THOMAS: Ludwig can throw hands but he isn’t as tough these days. Che Mills will look for a way to win if he can dodge the Muay Thai specialists attack. Che Mills via Decsion

JAN GAETJENS: I’m always skeptical when it comes to aging strikers, and Ludwig’s reckless approach to his last two outings doesn’t do much to convince me otherwise. I don’t see Mills putting him away, but he’ll at least do enough in the stand up battle to win over the judges. Mills by decision.

One thought on “ProMMAnow.com UFC on FUEL TV 5 staff picks”