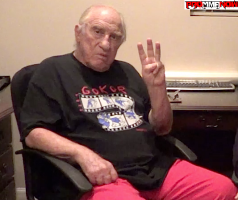 ProMMAnow.com (www.prommanow.com) reporter Daniel Theodore recently sat down with the legendary “Judo” Gene LeBell to discuss his colorful life and influence on the world of grappling and mixed martial arts.

In part 1 LeBell talks about his 1963 mixed rules bout with pro boxer Milo Savage, who was ranked no. 5 in the world at the time. It was a match which is largely accepted as the first-ever official mixed martial arts bout.

LeBell also talks about his time working in the pro wrestling business with some of the old-time greats like Karl Gotch, Lou Thesz and Vic Christy — wrestlers who LeBell says were all the “real thing”.

Be sure to check out part 2 where Uncle Gene talks about working with the likes of Elvis Presley and Bruce Lee, and discusses his mentoring relationship with Ronda Rousey. Learn more about Gene LeBell at www.GeneLeBell.com. Also check out this mini-documentary from TheFightNerd.com on Gene’s match with Milo Savage.