This is Sparta! – Matchmaking 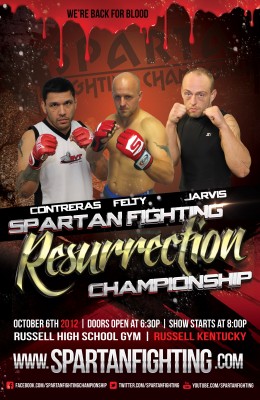 As the matchmaker for any company it all comes down to relationships. You have to prove yourselves to fighters and managers before they will even consider being a part of your event. For the most part I have been the sole matchmaker for Spartan and above any other aspect of running a promotion this is the most difficult. Even with just three weeks to go I am still working and tweeking the fight card for SFC 15.

Some say there is a science to putting fights together. Even Joe Silva has matched some dud fights in his day. The difference between Joe Silva and Terry Callihan is that I don’t have the whole industry at my disposal nor do I have the financial backing of a billion dollar company. I must rely on who I know and who I trust.

When I try to put together a fight I first go with the guys I know. I am talking about fighters that have been with Spartan since its beginning. Those guys get top billing. Why? The have proven themselves to be loyal. Loyalty to me is better than cash money. If you are a supporter of my organization and you are a fighter you must know you will always have a home here. From the guys still duking it out in our amateur division to the guys now in the pro ranks, I do my best to find great match ups.

I think a good match up is not what you see on paper but the style of the fighter and the attributes he brings to each fight. I hate seeing fights between two guys who have totally opposite skill sets. I like to meet in the middle and see who the best stand up guy is, who the best jiu jitsu player is or who has the best wrestling. When you see fights at our events you can rest assured that they are fights that fans will be forced to stand up and cheer about.  It is just a big undertaking to get to the point of putting two guys in the cage against each other.

The hard part is getting new blood or getting the best talent that I do not know. For this I rely on a select few people to help me. To date I have not been disappointed. There have been several to help me out and assist me in breaking the ice.

The first guy I have to give some love to is Kenny Diamond. Kenny has helped with Spartan for awhile now and as a former promoter he does a great job. I am not the easiest guy to work with but Kenny has stood with SFC through the bad and the good. When I took my show away from Ashland and went to Morehead, KY , Steve Armentrout helped put some fights together. As a result every fighter showed up to the weigh ins and all the fights cleared the commission. Those things are hard to accomplish these days.

I can’t say enough how much Mike Camp comes through. I hate to even call him because this guy match makes in like 5 states and is always busy but without  him it would be hard to get things finalized. Mike works his tail off and is a great guy to have helping me.

Last but not least there is Brandon Higdon.  We call him Hardrock and he is the matchmaker for his own promotion. This guy knows everyone in Kentucky and beyond. Even though we both have our own shows to run Brandon has always came through when I needed him and I consider him to be a friend in a business that often times is cut throat.

I am building the next lineup with a odd mix of my loyal fighters and new faces to SFC. There is never enough time in the day to talk to everyone you need to talk to or work on the things that should be handled. When you have people like the ones I have mentioned to help it makes it a tad easier to do what I do. I have the utmost respect for all the fight makers in the business. To even try to build an event and get a final product is such a headache. If I wasn’t such a control freak I would probably just hire someone to do it but I think after a couple years of practice I have gotten to be pretty good at it.

“This is Sparta!” is a weekly ProMMAnow.com (www.prommanow.com) blog written by Spartan Fighting Championship owner/promoter Terry Callihan and is part of ProMMAnow.com’s ongoing series of exclusive content written by individuals involved in the mixed martial arts industry. Visit the Spartan Fighting Championship website at www.SpartanFighting.com. Follow them on Twitter at @SpartanFighting and on Facebook.

One thought on “This is Sparta! – Matchmaking”