Townsend out, Chris Wright in to face Nate ‘The Train’ Landwehr at XFC 20 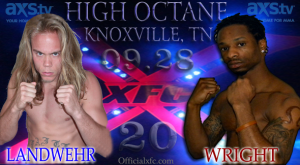 The XFC announced earlier today that Chris Wright (6-1-1) will step in on short notice to fight Nate “The Train” Landwehr in Knoxville at XFC 20 “High Octane”. Landwehr was slated to fight Adam Townsend but Townsend has had to withdraw.

Chris Wright last stepped in the cage at XFC 16 where he won a unanimous decision victory against Len Cooke. Just prior to that he dropped a submission loss Cornelius Godfrey who too will be on the XFC 20 card.

Wright gets the nod when it comes to experience. He is an XFC veteran and has eight total fights on his resume. Landwehr, however, is coming off his professional debut at XFC 18 in Nashville. Although they have never fought both men are familiar with each other. Wright will be moving up in weight as he is generally a bantamweight.

The XFC has upped the ante so to speak. In their official press release they suggest the winner of this fight may receive a long term contract with the organization. The XFC has called Tennessee their second home and XFC 20 will mark their fourth trip to the Volunteer State this year.

XFC 20 “High Octane” will take place September 28th in Knoxville, Tenn. with the main card airing live on AXStv. Be sure you stay close to ProMMAnow.com (www.prommanow.com) for full coverage. For interviews with the fighters be sure to check out Pro MMA Now Radio every Thursday night at 10 p.m. ET / 7 CT.