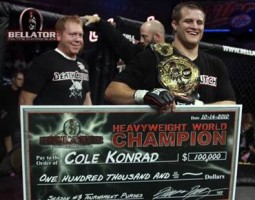 In a surprise turn of events it is being reported that Bellator heavyweight champion and undefeated mixed martial artist Cole Konrad is calling it quits. The media outlet TwinCities.com broke the news in a brief snippet yesterday reporting Konrad’s departure.

The champ won Bellator’s inaugural heavyweight tournament in 2010. A year-and-a-half later he defended his title for the first time, making quick work of Eric Prindle via first round submission back in May.

Bellator officials have yet to comment on this. The 28-year-old Konrad is reported to be taking a job in the financial sector. Konrad is said to be working for North Central Trading as a financial trader specializing in milk products.

Retirement is often not a permanent situation in the MMA world. We have seen many fighters say they are retiring and then have one or five comeback fights. Konrad swept through MMA competition much like he did in his days as a NCAA Division I wrestling champion at the University of Minnesota and one would think if he had been able to compete on a regular basis he would not need nor want to earn money behind a desk.

Bellator does have a heavyweight tournament planned for their upcoming seventh season.