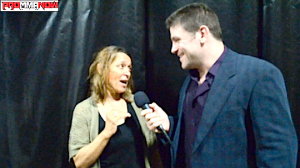 That’s the philosophy of Ronda Rousey‘s mother, Dr. Ann Maria Rousey DeMars, on her daughter’s continuing stoppage of opponents in the first round via armbar submission.

Dr. DeMars became the first American to win the World Judo Championships in 1984, and began teaching her daughter armbars and other grappling techniques at a very early age. And now, several years later, her daughter is the Strikeforce women’s 135-pound champion and the leading women’s mixed martial arts fighter in the world.