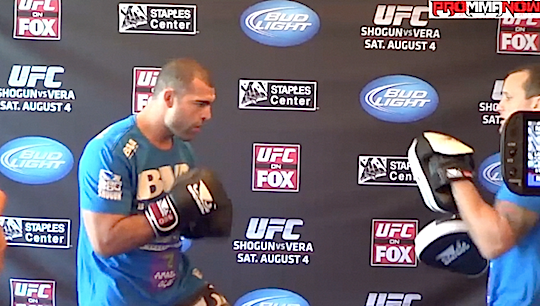 We watched Shogun Rua defeat a game Brandon Vera on Saturday night via TKO. I didn’t think it would be an easy fight because Vera matches up pretty well with Rua stylistically, but I want to go back to UFC 139 when Rua lost a close unanimous decision against Dan Henderson.

I remember thinking at the conclusion of that fight that neither of those fighters would ever be the same again. We’ll get to see if Henderson was able to fully recover from that fight when he takes on Jon Jones in September. The amount of damage that both inflicted and absorbed was simply incredible.

That thought continued to echo with me as it appeared that Rua was gassing near the end of round one against Vera on Saturday night. Rua just didn’t look like the same, and I’m not trying to diminish the effort of Vera as it was the best that he has looked in years. However, I think the amount of damage he has taken over the past four fights, not even mentioning the wars he had in PRIDE have finally caught up with him with the Henderson fight being the tipping point. Let’s look at some numbers in Rua’s last four fights in the UFC according to Fightmetric:

We can throw out the Griffin fight as Rua got an unmotivated Forrest Griffin out of there in less than two minutes. However, if we add up the number of significant strikes that Rua has absorbed in the other three fights it’ll confirm my point that the damage could catching up to him.

He has absorbed 219 significant strikes in those three fights. It’s understandable to see the numbers put up by Jon Jones and Dan Henderson. Jones is already arguably one of the greatest light heavyweights of all time. Henderson is arguably a top 5 MMA fighter of all time. They are simply better fighters than Brandon Vera, and for Vera to put up those kind of numbers against Rua is something to think about. Maybe Shogun was injured, or maybe Vera really did fight as his full potential as he realized the opportunity to fight Rua was a gift from the MMA gods based on where he was in his career. I want to hear from you guys.

How much does Rua have left in the tank at 30 years old? We have thought he was washed up after the loss to Forrest Griffin at UFC 76. We thought he was washed up with his subpar performance against an ancient Mark Coleman at UFC 93. However, he was able to regain his old form against Chuck Liddell, and the two fights against Lyoto Machida. Can he put it all together again, or are the signs I’m pointing out in this piece for real?