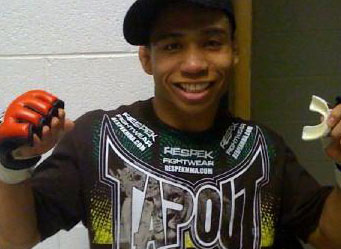 The UFC on FX 5 event is set for October 5th in Minneapolis, Minnesota, and will take place at the Target Center. The event will be headlined by a heavyweight showdown between Travis Browne and Antonio “Bigfoot” Silva. The UFC announced six additional bouts for the event on Tuesday, and those fights can be found below:

John Dodson (13-5) is coming off a unanimous decision win over Tim Elliot at the UFC on FOX 3 event. He also suffered a broken hand in that bout. Dodson is now (2-0) in the UFC and is the TUF 14 winner. He’ll be taking on Jussier Formiga (14-1) who will be making his UFC debut. Formiga’s only loss came via unanimous decision against UFC flyweight contender Ian McCall in 2011.

Darren Uyenoyama (7-3) will be making his second UFC appearance in this bout. He’s a Strikeforce, DEEP, and SHOOTO veteran who won his UFC debut via unanimous decision against “Kid” Yamamoto in November. He’ll be taking on TUF 14 competitor Louis Gaudinot (6-2) who’s (1-1) in the UFC after securing his first win against John Lineker at the UFC on FOX 3 event.

Bart Palaszewski (36-15) will be looking to rebound from his UFC 144 loss against Hatsu Hioki.  Palaszewski is (1-1) in the UFC with the lone win coming against Tyson Griffin at UFC 137 via KO. He’ll be taking on the always tough Diego Nunes (17-3). Nunes unanimous decision loss against Dennis Siver at the UFC on FUEL TV 2 event in Sweden. He’s (2-2) in the UFC with wins over former WEC champion Mike Brown and Manny Gamburyan.

Carlo Prater (30-11-1) is coming off a unanimous decision loss to T.J. Grant at the UFC on FUEL TV 3 event. Prater is officially (1-1) in the UFC, but the win is tainted because it’s a DQ loss against Erick Silva where the referee made an incorrect call for punches to the back of the head. He’ll be taking on Marcus LeVesseur (21-6) who was submitted by Cody McKenzie in his UFC debut at the same UFC on FUEL TV 3 event.

Justin Edwards (7-2) is coming off a unanimous decision loss against John Maguire at UFC 138. The TUF 13 alum is currently (1-2) in the UFC and will be taking on the always tough Josh Neer (33-11-1). Neer is coming off a KO loss to Mike Pyle at the UFC on FX 3 event. Neer had rattled off six consecutive wins prior to the loss and will be looking to use his experience to take out Edwards.

Rob Broughton (15-7-1) is coming off coming off back-to-back unanimous decision losses at UFC 135 and UFC 138. He was victorious in his UFC debut against Vinicius Queiroz, winning via submission in the third round. He’ll be taking on Matt Mitrione (5-1). Mitrione is coming off his first professional defeat at the hands of Cheick Kongo at UFC 137. This bout was originally set for the UFC on FOX 4 event, but Broughton withdrew from the bout due to personal reasons. It’s now set for UFC on FX 5