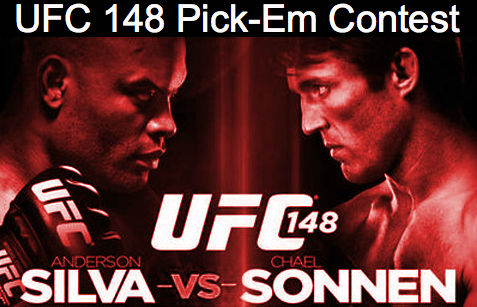 In the co-main event, two former UFC light heavyweight champions will clash for a third time. Tito Ortiz andForrest Griffin have fought twice before; Tito won the first one via split decision and Forrest won the second time via split decision. This is Tito’s last fight, will he be able to retire with a victory?

Using the comments section below, contest entrants will pick the winner of each fight, including method of vicory and the round the fight ends (take care to use your real email address so we can contact you if you win). The peson with the most correct picks* will win a ProMMAnow.com prize package that includes a Pro MMA Now T-Shirt and Brock Lesnar’s new book, “Death Clutch – My Story of Determination, Domination and Survival”. We may give second and third place prizes too, depending on number of entries.

Good luck! You can contact ProMMAnow.com staff at prommanow@gmail.com if you have any questions or are a company that would like to sponsor a future contest.

* – If it goes to a tie breaker we will use the method of victory and round of finish to determine the winners.

Did you know ProMMAnow.com now holds pick-em contests for each event? That’s right! Check out our Contest page at any time to see which contest is currently in effect or which one is coming next. You can also keep up with all ProMMAnow.com’s news, radio shows and contests on our brand new Android App.