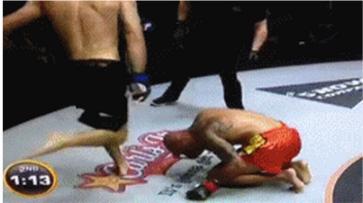 Former UFC lightweight contender Roger Huerta fought under the One FC banner this weekend and suffered one of the most brutal knockout losses you’ll ever see. Below you’ll see Zorobabel Moreira throw an obviously tired and worn down Huerta to the canvas and then soccer kick him in the head to put him away. See the .gif below:

Would you support the implementation of soccer kicks/stomps in the UFC or do you like the rules the way they are? Feel free to state your opinion in the comments section.