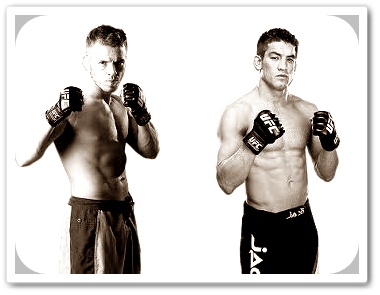 The UFC on FX 4 event will feature a lightweight bout between two very exciting fighters as Spencer Fisher and Sam Stout will lock horns for the third time. Both fighters have won one fight in the series with Friday night determining the winner of the rubbermatch. These two first met at UFC 58 with Stout winning a controversial split decision as Fisher took the fight on very short notice when Stout’s original opponent (Kenny Florian) had to withdraw due to injury. However, Fisher would avenge the loss with a unanimous decision win over Stout in 2007. Both fights have been stand up wars and this one should be no different. Let’s see how this one breaks down.

Spencer Fisher (24-8) comes into this fight on a bit of a slide as he has lost his last two fights dating back to 2011. In fact, he has lost four of his last five fights dating back to a submission loss against Joe Stevenson at UFC 104. Fisher has indicated that this could be the last fight unless things go extraordinarily well. He has a good chin, good striking, and is versed in submissions. Fisher’s biggest problems have come against guys that have been able to take him down and control him on the ground. He also gets cut very easily and bleeds heavily in almost every fight.

Sam Stout (17-7-1) comes into this fight off a loss to Thiago Tavares at UFC 142. Tavares also handed Fisher his last loss as well. Stout had won back to back fights prior to the loss including a highlight reel KO win against Yves Edwards. Stout has good technical striking, a granite chin, and good cardio. The knock on Stout is that his ground game has never caught up with is striking skills.

I don’t expect this fight to be much different than the first. I expect it to be a standup war with the only difference being that I think Fisher’s age is beginning to catch up with him a bit. It’s telling that a guy (Tavares) with on TKO stoppage is able to put someone like Fisher away. I also think Stout has progressed more as a fighter since their last matchup. If Fisher fights smart he should try to take Stout down and work some ground and pound or submissions as Stout is no threat to submit him off his back. However, it will be difficult for Fisher to resist the urge of standing toe to toe with Stout since that’s what these two have done for the first two fights. I don’t think Fisher has the power to finish Stout as he wasn’t able to do so in the first two fights, and Stout has never been finished via TKO/KO in MMA. The difference in the fight will probably come down to conditioning, and I would give Stout the edge there.

I think Stout takes this via TKO or unanimous decision.