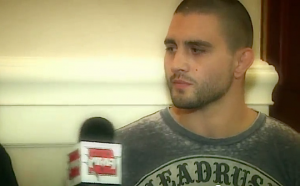 Hopefully by now you have already seen a different side of “The Natural Born Killer” in the interview we did with the UFC interim welterweight champion entitled “Seven things you did not know about Carlos Condit“.

But in this interview, ProMMAnow.com (www.prommanow.com) reporter Susan Cingari talks with Condit (28-5) about some more serious topics, including those rumors that UFC welterweight champion Georges St-Pierre may not be ready to return to action by November which would end up delaying their title unification bout even longer.

Condit isn’t buying those rumors. He said he has seen videos of St-Pierre training and thinks they are still on track to get down in November.

If St-Pierre is not able to fight this year though, Condit said he would like the chance to avenge his loss against Martin Kampmann. He also said there are other contenders in the division, guys like Johny Hendricks, Rory MacDonald and Jake Ellenberger, that are possibilities as well.

Condit shared his thoughts on a possible match-up with B.J. Penn and a rematch with Nick Diaz. He also talked about his coach Greg Jackson and why their school has had so much success.

Condit was asked which fighter he most admires. He explained why, for him, that person is none other than UFC middleweight champion Anderson Silva:

“He’s had a lot of ups-and-downs. I think that earlier on in his career before he got in the UFC he considered retiring and doing something else. And I’ve been at points in my career where my heart wasn’t in it, and to see where he is now after having had those feelings toward MMA is pretty inspirational.”