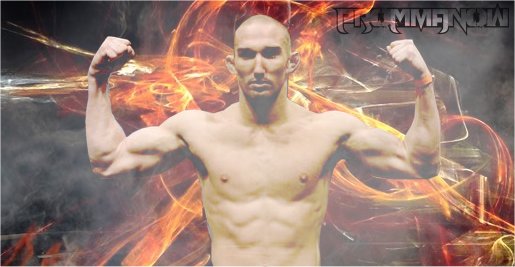 For John Salter (8-2), 2010 was undoubtedly an eye-opening year. After an impressive start to his professional career, which included three first round finishes, Salter got the call to fight for the UFC. But, after going 1-2 in the largest MMA organization in the world, Salter realized that while he thought he was ready, reality had proven otherwise.

“You know when I went to the UFC I really wasn’t ready to be there,” Salter said. “I think the biggest thing I learned was from the Dan Miller fight. I was doing great, everything was going my way and then we head-butted and it cut me over the eye and I freaked out. I just went into panic mode because I didn’t know how bad the cut was. After it was over with I went and looked, and it was a cut, but it wasn’t bad. It’s one of those things I realized that I’ve got to stay composed in that situation, so that was huge for me. I think I learned a lot from the UFC, but I think that was the biggest thing.”

In his time since departing from the UFC, Salter has won all three of his subsequent bouts, which include one fight with Strikeforce and two for Canadian promotions. And while Salter wishes he could have fought more, he hasn’t let the infrequency of his bouts hinder his progress towards becoming the best mixed martial artist that he can be.

“You know I think a lot of people probably look at the fact that I’ve only fought three times since [leaving the UFC] and they think that I haven’t been doing a whole lot,” Salter said. “I’ve been training twice a day pretty much every day since then. I haven’t taken any time off. As soon as [the fight with Miller] was over with I went right back to the drawing board and looked at what I needed to change. I’ve got to get better everywhere, and I’ll only be satisfied when I feel like I’m the best at everything.”

Currently, Salter is on the verge of his most high profile fight to date since leaving the UFC as he is set to take on Reggie Pena (9-5) in the main event of “XFC 18: Music City Madness”.

“To fight in the main event on anything that is a nationally televised show is a big deal,” Salter said. “It’s very exciting and I’m also really excited about the fact that I’m fighting in the South. I’ve got a lot of friends and family coming that rarely get to watch me fight, so I’m really excited about that. Having everybody coming out and everything is great. Plus, I’ll be fighting Reggie Pena who is a tough guy, so I’ve got to keep that in mind too that it’s not all fun. He’s going to be tough, but I’m very excited about it and ready for it to be here.”

XFC 18 takes place this Friday, June 22 at the Municipal Auditorium in Nashville, Tenn., and will be shown live on HDNet beginning at 10 p.m. ET (7 p.m. PT).

For Pena, who is coming off of a unanimous decision victory over Josh Clark at XFC 14 last October, defeating Salter would unquestionably be the biggest win of his career. But despite how dangerous Pena can be, Salter is confident that he’ll be better than his opponent no matter where the fight goes.

“Reggie is a tough wrestler and I’m sure he’s going to hit hard,” Salter said. “I’m sure he’s going to come out there and try and take me down because he has done that in a lot of his fights. I feel like it’s a pretty good match-up all around, and not to take anything away from him, but I think that I’m going to have the upper hand everywhere.”

Salter’s confidence in part comes from the training camp he had at Nashville MMA in preparation for his bout with Pena. In addition to training with Bellator’s Chris Davis, who also fights on Friday night, Satler also trained with Chris Barnhizer who flew down after taking some time off from helping Chael Sonnen prepare for his UFC 148 bout against middleweight champion Anderson Silva.

“It has actually been an incredible camp,” Salter said. “It has probably been the best training camp that I’ve ever had. I feel in the best shape that I’ve ever been in for a fight, and I’m ready. I don’t really feel like there is anything that I could have done better for this camp.”

For Salter, Friday’s bout with Pena is more than just a main event, it’s the pivotal next step in his career and plan for the future.

“Every fight is huge,” Salter said. “I want to be the best there is at my weight. I know that sounds cliché, but my goal definitely is not just to get back in the UFC or anything like that. Whatever organization I end up in, I’m not so concerned about that. I just want to be one of the top guys in the world.”

John Salter would like to thank God for giving him the ability to do this and for the walk with Him that helps him day to day in his life. John would also like to thank his wife for putting up with him being banged up and injured all of the time, and both of their families for always being supportive. He also would like to thank everybody at Nashville MMA and everyone that has helped him throughout his training camp.

For more information about John Salter you can visit his website JohnSalter.com and you can find him on Twitter @JCSalter_MMA. Salter was also recently a guest on Pro MMA Now Radio, which you can listen to here.