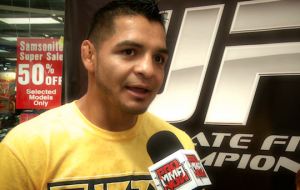 Reporting for ProMMAnow.com, Susan Cingari caught up with UFC featherweight Leonard “Bad Boy” Garcia (15-8-1) at the UFC on FX 3 open workouts Wednesday in Sunrise, Fla. Cingari talked with Garcia about his upcoming bout with Matt Grice (14-4) which takes place Friday on the UFC on FX 3 Fuel TV preliminary card.

Garcia talked about his game plan for Grice and his chain submission plan if it goes to the ground. He said it is something he worked on heavily for this fight and which he feels works well against wrestlers. Garcia thinks Grice will likely come out striking until he gets hit then look to take it to the ground.

Garcia talked about his fan-pleasing fight style and said it is something ingrained in him and something the fans can always expect. However, Garcia did say he would like to make the fight a bit more technical this time. Garcia also discussed potential rematches with Nam Phan and Chan Sung Jung, and mentioned Cole Miller as someone else he hopes to match up with in the future.