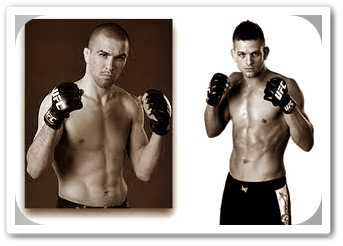 The UFC on FX 3 event will feature a welterweight matchup between Josh Neer and Mike Pyle in a fight that could absolutely be “Fight of the Night”. Both fighters are coming off wins with Neer winning his last six with all the victories coming via stoppage. Let’s see how this one breaks down.

Josh Neer (33-10-1) comes into this fight off the win over Duane Ludwig earlier this year. Neer was able to weather the striking storm of Ludwig and submit him in the very first round. Neer is as durable as they come and can win the fight anywhere, but most of his wins have come via TKO/KO. He has won 17 fights via TKO/KO and 12 via submission. His last lost came against former Bellator Lightweight Champ Eddie Alvarez over two years ago.

Mike Pyle (22-8-1) comes into this fight off the win over Ricardo Funch at UFC 142. Pyle has won four of his last five fights with the only loss coming against rising phenom Rory MacDonald at UFC 133. Pyle has won the majority of his fights on the ground with 16 wins coming via submission and 3 via TKO/KO.

I would be all over Neer with those odds as I certainly don’t see him as that big of an underdog in this fight. I pretty much see this fight as a pick’em.

These two guys are mirror images of one another in that they are both tough and durable while having underrated submission games and adequate striking. Pyle will have a slight reach advantage on the feet, but Neer has the edge in experience with over 40 fights but is also the younger fighter by about seven years. Neer has only been stopped by TKO once in his career while Pyle has been stopped on three different times. Also, both fighters have beeen submitted four times in their careers.

I think both fighters will cancel one another out on the ground as their jiu-jitsu levels are pretty much the same. Pyle favors the rear naked choke the most but also favors the triangle choke when he’s got someone in his guard. Neer also favors chokes for his submissions but has shown the ability to slap on armbars as well as the triangle choke with someone in his guard. I think this will be a grueling fight with a lot of back and forth between the two. Both guys are difficult to put away and this fight will most likely go to a decision. Neer has been on quite a roll and give him the slight edge on the feet as well as takedowns.

Neer should pull off the upset via unanimous decision.