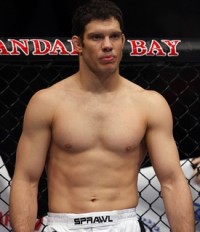 “Don’t let the fight go into the hands of the judges” is an often used phrase in the MMA world and with seemingly a controversial decision happening every few fight cards that infuriates fans and pundits alike; it appears to be a correct warning.

Many people believe that the various athletic commissions’ assigned judges are not educated enough in mixed martial arts, coming over from boxing and not understanding the other intricacies of combat or are only knowledgeable in one field of the many fighting styles and arts that are on display inside the cage during any given fight.

It is one thing to urge fighters to ensure victory by finishing, but they deserve to have their fights judged accurately and fairly. It is likely there will be no better judge than someone who has experienced what goes on inside the cage, that is why Johnny Hendricks and Josh Koscheck were both happy to find out one of the judges for their fight will be UFC and Pride veteran Ricardo Almeida.

Almeida retired from MMA in 2011 from a career that saw him fight all over the world notching notable wins over Nate Marquardt and Matt Brown, fighting in both the UFC and Pride, and capturing a middleweight king title in Pancrase.

Before his retirement, the third degree black belt under Renzo Gracie already had a highly successful jiu jitsu academy in Hamilton, N. J., and the running of that academy was one of the reasons cited when he announced his farewell to a career inside the cage.

If teaching at the academy and training such stars as former lightweight champion Frankie Edgar did not keep him close enough to the sport, one week into his retirement he became a professional MMA judge for the New Jersey athletic commission.

Although not the first ex-pro fighter to become a judge, he is arguably the most well known fighter to become a professional judge so far. It is surely a step that many ex fighters will take in their life after hanging up the four ounce gloves and what better place could a fight’s decision fall into the capable hands of someone who has (as the old saying goes) “been there and done that.”

Almeida has been assigned by the New Jersey athletic commission to judge several fights on the UFC on FOX 3 card including the co-main event featuring Johnny Hendricks and Josh Koscheck. Both fighters seemed enthused that Almeida would be one of the judges for their fight. Speaking on the UFC on FOX 3 media call on Thursday, Koscheck thought that judging will be a natural evolution for ex fighters:

“It’s good for the sport. I think as this sport grows we’re going to see more ex-UFC fighters become judges.”

Hendricks cited that someone who had been inside the cage knows what matters in the cage:

“I think that’s what we need, people like that stepping in there and doing that kind of stuff because they know what it’s like to jump in the cage. He is going to know a little bit more about the sport and going to know what positions really mean. He’ll know when a strike actually lands.”

To err is human, but ex fighters becoming judges is certainly a right step in ensuring better judging and a reduction in decisions that leave everyone shaking their heads.

UFC on FOX 3 takes place on May 5th at the Izod Center in East Rutherford, New Jersey. Headlining the event will be a championship eliminator bout between Nate Diaz and Jim Miller.