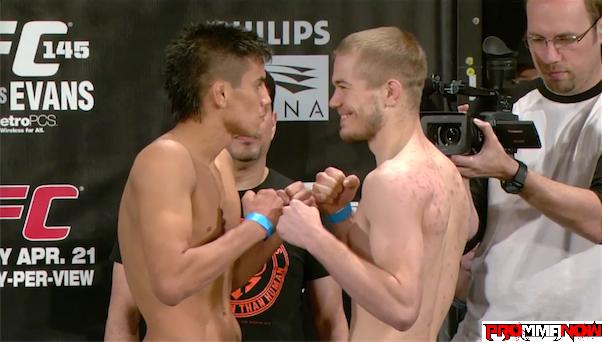 The UFC 145 event will feature a bantamweight fight between former WEC champion Miguel Torres and rising prospect Micahel McDonald that’s set for Saturday night in Atlanta, Georgia. This could potentially be one of those “pass the torch” type of fights, but Torres could spoil the show as he’s still in his physical prime as a former champion. Let’s see how this one shakes out.

Miguel Torres (40-4) comes into this fight off of a unanimous decision win against Nick Pace at UFC 139. Torres has 23 wins via submission and nine wins via TKO/KO. The former champion is (3-2) since losing his title against Brian Bowles in 2009. Torres is incredibly lanky with a long reach for a bantamweight while have a very active jiu jitsu ground game as evident by the number of submission wins he has in his career.

Michael McDonald (14-1) comes into this fight off of a knockout of the night performance against Alex Soto at UFC 139. McDonald is the youngest fighter ever signed to the Zuffa owned UFC, and has avenged the lone loss on his record. He has four wins via submission and eight wins via TKO/KO.

That’s probably about right as Torres has a huge experience edge in this fight, but McDonald has a very good skill set for such a young fighter.

The key to this fight will be how McDonald will deal with the reach advantage of Torres, and does he want to go to the ground with him. Torres will have a six inch reach advantage, but McDonald is successful on 83% of his takedowns. It should be noted that Torres almost never goes for takedowns as he is comfortable off his back with the active guard. He should be as his takedown defense is pretty horrible.

The edge in power goes to McDonald so he can come forward without fear of a takedown or getting hit with a heavy strike which should play to his advantage. Torres will pump a jab out there with his reach, but he’s not very accurate with it nor is he a big kicker. If Torres wins, I think he has to do it via submission as McDonald can take him down at will if Torres is getting the better of the striking. I think McDonald is capable of winning a decision or stopping Torres via strikes. This fight has the potential to be fight of the night so don’t blink!