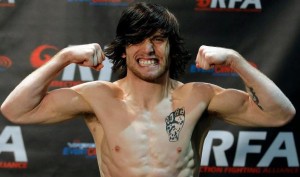 News has emerged that rising flyweight fighter Tim Elliott (8-2-1) has signed with the Ultimate Fighting Championship and will begin his journey in the big leagues with a bout against TUF 14 bantamweight winner John Dodson (12-5) at UFC on Fox 3.

The news of Elliott being signed was first announced by his team at Grindhouse MMA. This was followed by the addition of Elliott to the UFC.com flyweight roster list and the appearance of his name on the official UFC on Fox 3 fight card ,which is also viewable on UFC.com showing him matched-up against Dodson.

It has not yet been made clear why Darren Uyenoyama (7-3) will no longer fight at the event and no official announcement has been made by the UFC in relation to the change yet, but it is clear from the fight card that a switch has taken place.

The UFC on Fox 3 event will take place on May 5 at the IZOD Center in East Rutherford, N.J., and will feature a headline fight between Nate Diaz and Jim Miller.

Former collegiate wrestler Tim Elliott has won his last eight fights in a row, showing the ability to finish fights by both knockout and submission. Elliott has most recently been fighting on the regional circuit for Resurrection Fighting Alliance where he has picked up notable victories over former UFC champion Jens Pulver and also Josh Rave.

Dodson was last in action at the TUF 14 Finale in December 2011 where he defeated T.J. Dillashaw via first round TKO, earned “knockout of the night” and became the 135 pound The Ultimate Fighter season 14 winner. Dodson is returning to flyweight where he will face Elliot on May 5.