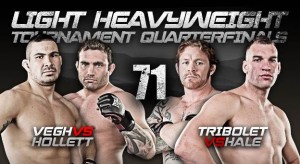 Bellator Fighting Championships will hold the first event of their 2012 Summer Series at The Mountaineer Casino Racetrack and Resort in Chester, W.V. on Friday, June 22. The event, Bellator 71, will feature the quarterfinals of the Summer Series light heavyweight tournament and will air live on MTV2 at 8 p.m. ET, while the prelims will stream live on Spike.com at 7 p.m. ET.

“We’ve been in discussions with the team at Mountaineer Resort for quite some time, looking to bring a major nationally and internationally televised event to this spectacular Casino Resort. When the chance came to host the opener of our Summer Series, we jumped at the chance.”

The remaining light heavyweight quarterfinal bout at Bellator 71 will include MMA ultra-veteran Travis “Diesel” Wiuff taking on an opponent to be named at a later date. Stay close to ProMMAnow.com (www.prommanow.com) for the announcement.