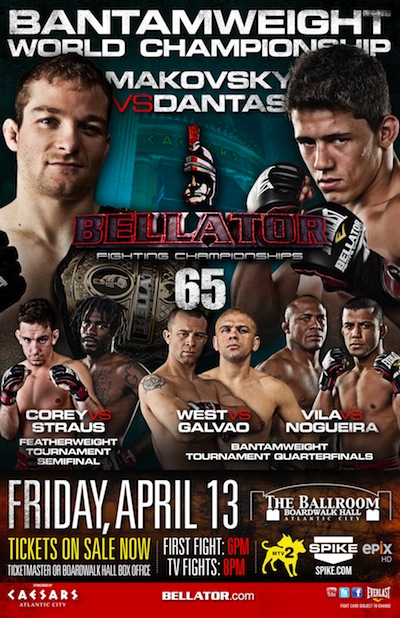 Former Bellator welterweight champion Lyman Good (11-2) returns to take on LeVon Maynard (12-8) in a 185 pound match-up. It is Good’s first bout since dropping a split decision to Rick Hawn in the Bellator season four welterweight semifinals in April 2011. Maynard is coming off a unanimous decision win over Christopher Wing at Bellator 59 back in November.

Philadelphia’s Will Martinez (3-2-1) takes on TUF 12 vet Andy Main (5-1) at featherweight. Main will be entertaining his hometown New Jersey fans in his Bellator debut. His last bout was against Felipe Arantes in April 2011 at UCC 4 and it ended in a no-contest. It will also be Martinez’s Bellator debut and he is on a two-fight win streak.

Bellator open tryout winner Ailton Barbosa (10-3) will take on TUF 11 vet Kris McCray (7-3) at welterweight. The bout will mark Barbosa’s third Bellator appearance and is 1-1 in the promotion. He dropped a decision to Valdir Araujo at Bellator 58 back in November. McCray has won two in a row since being released from the UFC last year. He last fought in November, scoring a decision win over Gemiyale Adkins at PA Cage Fight 9.

Newark native Plinio Cruz (5-4) will make his Bellator debut against Pennsylvania’s Duane Bastress (4-1) at middleweight. Cruz is coming off back-to-back losses in M-1 against Tyson Jeffries and Magomed Sultanakhmedov. He does hold a notable win over Jay Silva. Bastress is coming off a second round TKO win over Daniel Gracie at Bellator 54 last October.

Two-time Bellator veteran Lester Caslow (7-6) of Point Pleasant, N.J., returns to take on Scott “The Animal” Heckman (9-3) at featherweight. Caslow is 1-1 in his Bellator career. After dropping a decision to Kenny Foster at Bellator 33 he returned at Bellator 49 with a second round TKO over James Jones. Heckman is also 1-1 in the Bellator cage. Following a loss to Alexandre Bezerra at Bellator 49, he returned with a first round submission of Brylan Van Artsdalen at Bellator 59.

Rounding our the Bellator 65 preliminary card is a featherweight match-up between Kenny Foster (9-6) and Jay Haas (10-8). Foster is on a four-fight skid, most recently dropping a submission to Alexandre Bezerra at Bellator 60 last month. Haas is on a two-fight skid, most recently dropping a  first round submission to Anthony Morrison CFFC 13 in February.

Bellator 65 will broadcast LIVE starting at 8 p.m. EST on MTV2 and in commercial-free HD on EPIX. The preliminary card will stream LIVE on Spike.com starting at 7 p.m. EST.