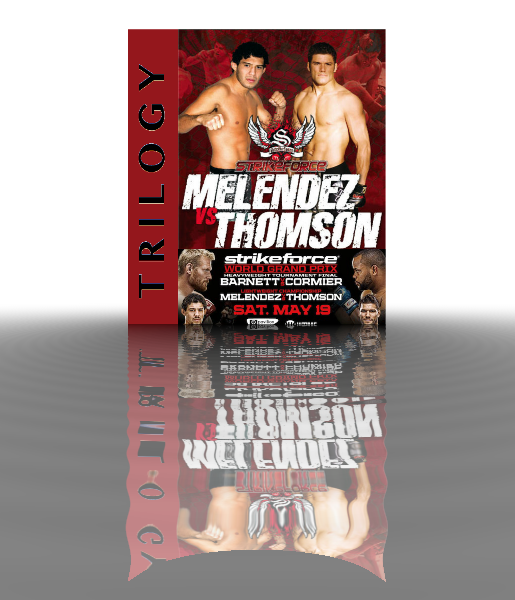 Strikeforce lightweight champ Gilbert Melendez (20-2) will  put his title on the line against Josh Thomson (19-4) in a May 19 rubber match at the HP Pavilion in San Jose, Calif., in an event headlined by the Strikeforce World Grand Prix heavyweight tournament final bout between Josh Barnett and Daniel Cormier.

Strikeforce: In the Beginning

Melendez and Thomson are both ingrained into the fabric of the Strikeforce promotion and the organization’s lightweight championship. Both fighters fought on the very first Strikeforce MMA card, “Shamrock vs. Gracie”, back in March 2006, Thomson losing a decision to Clay Guida for the lightweight title and Melendez defeating Harris Sarmiento via submission due to punches.

Three months later Melendez took the title from Guida via split decision, and every Strikeforce bout he has fought since then, except for one, has been a lightweight championship bout.

Melendez and Thomson first clashed at “Strikeforce: Melendez vs. Thomson” in June 2008. It was Melendez’s second title defense and Thomson won via unanimous decision. To this day it remains Melendez’s only Strikeforce loss.

Thomson was scheduled to make his first title defense against Melendez in April 2009 but ended up breaking his ankle in training. Strikeforce brought in BJJ black belt Rodrigo Damm to replace Thomson and instituted a 155 pound interim title. Melendez knocked Damm out in the second round to take home the belt.

Four months later, in August 2009, Melendez successfully defended his interim title with a third round TKO victory over Pride veteran and former Shooto champion Mitsuhiro Ishida. It was a redemptive win for Melendez as Ishida was the only other fighter other than Thomson to hold a win over him. The two had fought at “Yarennoka!”, a New Year’s eve event held on December 31, 2007 in Saitama, Japan.

Following his ankle injury, Thomson, still holding the Strikeforce lightweight title, returned to action in September 2008 in a non-title bout with relatively unknown Lion’s Den product Ashe Bowman. Fortunately for Thomson he made short work of Bowman via first round TKO in just over a minute.

On a side note: Although Bowman had won three straight, and six out of seven fights coming into the bout with Thomson, he has not won a single fight since and is currently on a six fight skid (four via TKO).

With Thomson holding the Strikeforce lightweight title and Melendez holding the interim title, the two met for a second time in December 2009. And once again, the bout went the five-round distance, but this time it was Melendez who was awarded the unanimous decision victory thus unifying the belts.

Thomson has fought four times since he and Melendez last fought, and three of those fights were in 2010. He submitted Pat Healy via rear-naked choke in April 2010, he scored a unanimous decision win over Gesias Cavalcante in October 2010 and then lost a unanimous decision to Tatsuya Kawajiri in December 2010.

Thomson’s most recent bout took place last month against K.J. Noons on the “Strikeforce: Tate vs. Rousey” undercard. Although it was not the most exciting fight to watch due to Thomson’s strategy, he did what he needed to win and the judges awarded him two of the three rounds for the unanimous decision win (see ProMMAnow.com’s Thomson vs. Noons play-by-play).

Melendez vs. Thomson 3 and the future of Strikeforce

The win also set up the rubber match with Melendez and once again provides Thomson the opportunity to fight for Strikeforce gold. No one is quite sure how much longer Strikeforce is going to be around. With the ZUFFA purchase and a Showtime contract winding down it seems the end is at one point or another inevitable.

Whatever happens and when that day does finally come future MMA generations will forever be able to look back at one of the sport’s cornerstone promotions and read about two of the fighters who were instrumental to its success and popularity.

For the complete May 19 Strikeforce card as it stands see our Upcoming MMA Events page, and stay tuned as more undercard bouts will be confirmed in the coming days.