Spencer Fisher vs. Sam Stout to complete trilogy at UFC on FX 4 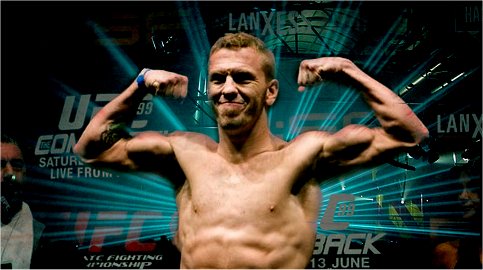 The UFC has announced that Spencer Fisher and Sam Stout will complete their trilogy at the UFC on FX 4 event that’s set for June 22nd, in Atlantic City, New Jersey. The two first fought all the way back at UFC 58 in 2006 with Stout winning via split decision.

The second encounter took place a  year later in 2007 with Fisher winning the bout via unanimous decision. These two have gone to war twice in fights that were full of striking action and this one should be no different. However, this lightweight bout is an important fight as both fighters are coming off of losses.

Fisher (24-8) has lost four of his last five outings including dropping his last two bouts that took place in 2011. Fisher probably needs a win if he expects to stay in the UFC. He is a well rounded fighter, but just seems to not have that extra gear anymore when it comes to defending takedowns and/or getting back up to his feet where he prefers to strike. He shouldn’t have to worry about takedowns with Stout standing across from him.

Stout (17-7-1) is coming off a loss to Thiago Tavares earlier this year at UFC 142. Stout had won back to back fights going into that bout including a highlight reel KO of MMA veteran Yves Edwards at UFC 131. He is (3-2) dating back to 2010 with the other loss coming via split decision against Jeremy Stephens. Stout has a kickboxing background and probably will stand and strike with Fisher as the two have done in their two previous bouts. It should be another war.

These two fighters do have common opponents as both fighters lost to Thiago Tavares in their last fights. Fisher has a win over Jeremy Stephens while Stout has a loss against him. The tentative UFC on FX 4 card can be found below:

2 thoughts on “Spencer Fisher vs. Sam Stout to complete trilogy at UFC on FX 4”