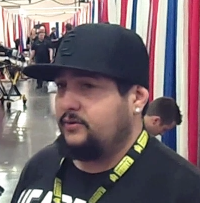 Headrush is one of the most popular mixed martial arts apparel companies in the industry today. ProMMAnow.com (www.prommanow.com) reporter Brian Furby recently caught up with the company’s U.S. Brand Team Manager Mike McLeish at the Headrush booth at the 2012 Arnold Sports Festival in Columbus, Ohio.

McLeish said being at the Arnold’s is all about the fans. It gives the fans a chance to interact with Headrush fighters like Stipe Miocic and Dustin Poirier in a way that would not normally be possible. McLeish talked about his relationship with the fighters, how Headrush as a brand markets their fighters and what it means to the brand when a guy like Stephen Thompson scores a memorable head kick KO in his UFC debut.

McLeish talked about some new things coming down the pike for Headrush in 2012 such as the new Chuck Liddell collection and the new T.J. Lavin collection. Also, McLeish said they really pay attention to the fans’ feedback so be sure to hit them up on Twitter at @mikeohmike and @HeadrushBrand.

Be sure to check out more of ProMMAnow.com’s coverage of the 2012 Arnold Sports Festival.