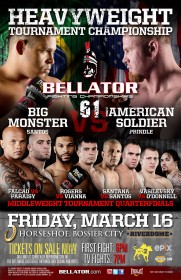 BOSSIER CITY, La. – Bellator 61 takes place this evening at the Horseshoe Riverdome in Bossier City, Louisiana, and will feature Bellator Fighting Championships’ season six middleweight tournament quarterfinals. A heavyweight rematch between Eric Prindle and Thiago Santos which was scheduled for the main event has been moved to Bellator 62 due to Prindle suffering from flu-like symptoms.

Bellator 61 will air LIVE on this evening starting at 8 p.m. EST/7 p.m. CST on MTV2. The preliminary card will start at 7 p.m. EST/ 6 p.m. CST and streamed LIVE on Spike.com. ProMMAnow.com (www.prommanow.com) will provide LIVE results and play-by-play commentary throughout the event.

Rogers moves on to the Bellator season six middleweight tournament semifinal round.

Round 1 – Touch gloves. Overhand right from Santana backs Santos up. Big leg kick from Santana. Misses a leg kick. Shoots for a single. Pushes Santos to the cage as Santos gives him some shots to the ear. Santana rolls backward taking Santos down but he pops up with Santana still holding on; repeat. Clinched against the cage. Santana takes a low blow and time is called. Time is started back in the clinch against the cage. They separate and square up in the center. Santana misses a high kick. Santana with a punch combo backs Santos up,  Santos clinches up, turns Santana to the cage, gives him a knee to the thigh. Knee from Santana. Knee from Santos to the thigh. Santana turns him around and Santos pushes him off. They square up. Straight left from Santos, inside leg kick barely connects. Big left hook from Santos. Huge leg kick from Santos. Again. Straight left. Left hand and big leg kick from Santana, then a couple punches before the bell.

Round 3 – Left hand from Santos. Clinch against the cage. They move to the center and square up. Big leg kick from Santos. Santana grabs a single leg, pushes Santos to the cage. Santos with some punches to the side of the head. They separate and throw some shots before Santos puts Santana on his back with a double leg. Santana shrimping. Santos with a left, moves to half guard, then stands up. Kicks the leg of Santana. Santana gets to his knee then stands. Left hand from Santos. Body kick from Santana. Less than a minute to go. Punch, shot, then takedown from Santos. He stands up, kicks the leg of Santana. Santana goes for a leg with under 10 seconds to go and time runs out. PMN scores the round 10-9 for Santos.

Round 1 – No touch of gloves. Paraisy backs Falcao up. Falcao catches a kick and puts Paraisy on his back. Falcao gets full mount very briefly and Paraisy explodes to his feet where Falcao drives him to the cage. Clinched, knee to the thigh from Falcao. They separate and square up. Leg kick from Paraisy. Body shot from Falcao. Nice right from Falcao, pushes Paraisy to the cage. Knees from Falcao to the thighs, another one. Another, again, again. Paraisy backs out, jab. Falcao catches a kick, lets it go. Big leg kick from Falcao. Paraisy gives him one back. Big leg kick on the end of a punch combo from Falcao. One minute to go. Falcao pushes Paraisy to the cage, knee to the thigh. Falcao picks up a single, lets it go, clinched against the cage where they trade knees. Just before the bell Falcao picks up Paraisy for a slam but he breaks the fall. PMN scores the round 10-9 for Falcao.

Round 2 – Leg kick from Falcao. Again. Again. Again with a big leg kick, again. Again, punch combo and a big leg kick. Another leg kick and he is tearing Paraisy up. Paraisy shoots, stuffed. Clinched, knees from Falcao to the thighs. They square up and Falcao goes back to destroying Paraisy’s legs with more big kicks over and over and it’s noticeably bothering Paraisy. They trade punches. One two push kick from Falcao. Paraisy calls him on and Falcao lands a couple punch combos then a big right that drops Paraisy. Paraisy gets up talking and Falcao tears him up with more punches and kicks until the bell sounds. PMN scores the round 10-9 for Falcao.

Round 3 – Touch gloves. Left from Falcao. Big leg kick. Front kick. He catches Paraisy’s front kick and trips the back leg. Falcao on top now in half guard. Big right hands from Falcao as Paraisy makes his way to his feet. Leg kick from Falcao, right from Paraisy. Paraisy is one tough customer. Paraisy shoots from outside, stuffed, Falcao gives him several punches to the body and face, he pushes Paraisy down flat on his back and lays on him in half guard. Tries to move to full mount. Paraisy tries to sweep, eats several punches but gets the sweep. Falcao has his head in a guillotine but lets it go. Paraisy on top now for the first time in this fight. Paraisy inside full guard. Falcao landing short shots from the bottom. Paraisy tries to work from top but Falcao’s defense is superb and lands several punches from off his back, big hammerfists from Falcao off his back. He blocks almost every punch from Paraisy until ref stands them up. Paraisy calls him on with 10 seconds left. They swing for the fences until the bell sounds. Awesome fight. PMN scores the round 10-9 and the fight 30-27 for Maiquel Falcao.

Maiquel Falcao moves on to the Bellator season six middleweight tournament semifinal round.