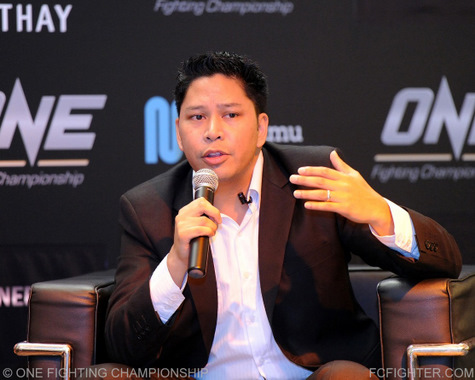 2012 is the Year of Asian MMA. As we predicted, Asian MMA is poised for a breakthrough year. As we write this story, there are literally new MMA organizations, new MMA gyms, and the like starting up every day. To help you navigate the landscape, here is our list of the 7 Most Powerful People in Asian MMA. These people are the movers and shakers in our industry. When they talk, people listen. When they act, things happen.

#1 Victor Cui, ONE Fighting Championship
He is the single most powerful man in Asian MMA today. As CEO and Owner of ONE Fighting Championship, Victor has a strong voice in almost every Asian MMA organization today through the ONE FC Network. He has aligned himself with almost every major power broker in Asia by creating the ONE FC Network, a massive partnership of the biggest MMA organizations, the best MMA gyms, etc. For the 1st time in history, we get to witness the best fighters across Asia compete against one another. We are talking the best of Japan, the best of Philippines, the best of Korea, etc. (For example, Shinya Aoki and Tatsuya Kawajiri are arguably the biggest names in JMMA and they are now both in ONE FC). On top of that, ONE Fighting Championship has managed to secure the largest media broadcast in Asia through ESPN StarSports, MNC, MediaCorp, and several other rumored, yet-to-be-announced deals in India, Malaysia, Thailand, and Korea. Victor talks the talk and walks the walk. ONE FC: War of the Lions is one of the most star-studded fight cards in recent history in Asia, featuring some of the best fighters from Japan, Philippines, Thailand, Korea, etc. In less than a year, he has united Asian MMA in a way that has never been done before. As such, Victor Cui is TFN’s #1 power player.

#2 Mark Fischer, UFC Asia
Mark Fischer is the Managing Director of UFC Asia. While UFC has not yet made a huge mark on Asia, you can bet that they will. UFC is the most powerful brand in MMA in the world. UFC is rumored to make some big announcements for India, China, Philippines, Singapore, Japan, and Korea. The only reason why Mark is not at the top of our list is because UFC has many projects going on at the same time – USA, Brazil, Australia, Europe, etc. Nevertheless, you can bet that Mark Fischer is very powerful. He is one of the key players to build the NBA in China. Mark has an extensive rolodex in sports and media. He has been busy flying around Asia and scouting for talent. Our sources (and they are very reliable) tell us that Mark has also been meeting with all the major media companies across Asia. Our sources tell us that the next UFC event in Asia is expected to be in November in Singapore, Korea, or Macau. You can expect to hear a lot of fighter signings by the UFC in the next few years. With UFC’s financial backing and brand, Mark can move mountains in Asia. Mark is a huge deal maker with a penchant for making things happen. He has a wealth of experience in sports and media and the knowledge to build a successful business.

#3 Chatri Sityodtong, Evolve MMA
Chatri Sityodtong is the CEO of Evolve MMA and he also heads the Evolve Fight Team, the largest Asian fight team. Most experts (TFN included) view Evolve MMA as the top MMA academy in Asia due to its bevy of world champions and accomplished fighters such as DREAM Champion Shinya Aoki, UFC fighter Rafael dos Anjos, ONE FC star Zorobabel Moreira, Lumpinee Champions Yoddecha Sityodtong, Namsaknoi Yudthagarngamtorn, Attachai Fairtex, to name a few. In fact, a few JMMA superstars such as Kitaoka Satoru and Tatsuya Kawajiri are rumored to be close to signing with Evolve. For a fighter, an invitation onto the Evolve Fight Team is akin to winning the lottery. It is probably the most coveted invitation for any fighter in Asia because it is access to the best training/coaching in Asia and an expressway to competing in the world’s largest organizations such as the UFC, ONE FC, DREAM, etc. Chatri is a multi-millionaire entrepreneur with significant financial resources to make anything happen. He is also heavily connected in the MMA industry around the world with close friends like Renzo Gracie, Greg Jackson, Yuki Nakai, Victor Cui, Matt Hume, Rich Franklin, Hiroyuki Kato, etc. It is interesting to note that Victor Cui and Chatri Sityodtong were the only Asian MMA power brokers to receive personal invitations from Dana White, Lorenzo Fertitta, and Mark Fischer as their guests at the recent UFC Japan.

#4 Hiroyuki Kato, DREAM Fighting Championship
Hiroyuki Kato is the man behind the man. Keiichi Sasahara is the face of DREAM, but Hiroyuki Kato is the owner of DREAM and was the CEO of PRIDE Fighting Championship. Despite the current economic slump, Japanese MMA is still the major leagues of Asian MMA. As a whole, Japanese MMA fighters are the best in Asia simply because the sport has been around for decades as a professional sport. While JMMA is currently in a slump due to the economic woes in Japan, JMMA is still the top dog. Other Asian countries are quickly gaining ground with ONE FC, Legend FC, URCC, ROAD FC, etc. Hiroyuki is the biggest power broker in Japanese MMA. He controls the most of the Japanese MMA superstars and top fighters. If you talk to Japanese MMA fighters, Hiroyuki strikes both fear and admiration in all of their hearts. While it has never been proven that Hiroyuki has direct ties with the Yakuza, it is widely rumored to be true. Our sources tell us that he is a legitimate businessman with businesses in entertainment and sports, but that he has many close friends in the Japanese mafia. Hiroyuki is arguably still the most powerful man in Japanese MMA today. He decides who fights who, when, and where.

#6 Michael Haskamp/Chris Pollak, Legend Fighting Championship
Legend Fighting Championship is one of the top MMA organizations in Asia. Mike Haskamp and Chris Pollak are the founders and owners of Legend. They are very well respected by the Asian MMA community and have a great roster of fighters. Mike and Chris are very connected in the finance and media worlds since Mike used to work at Lehman Brothers and Chris used to work in the media practice at McKinsey. In addition, Mike and Chris are Ivy League graduates with big connections in the US. Legend is also backed by Peter Chernin, a top media honcho. Legend has made huge strides in China and Mongolia. You can expect big things from Legend in the future. Mike and Chris are powerful businessmen with the ability to change lives.

#7 Moon Hong Jung, Road Fighting Championship
Moon Hong Jung is a former fighter and highly successful businessman worth over US$150m. Our sources confirm that he is highly established as a businessman in Korea and has a reputation as an aggressive go-getter. Moon Hong Jung has access to almost every Korean fighter in Korea. Many top Korean fighters are signed to his organization and/or are close to signing. ROAD FC is expected to do at least 12 shows in the next year. Also, Moon Hong Jung is very close friends with Victor Cui, CEO of ONE Fighting Championship. Victor can be spotted at cageside for all ROAD FC events and Hong Jung is also seen cageside at all ONE FC events.