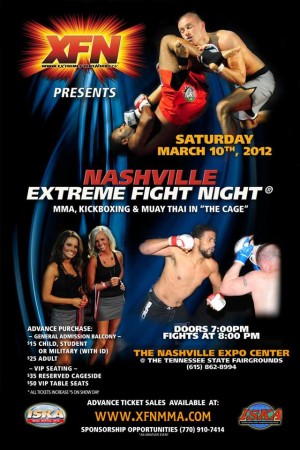 Former University of Alabama championship linebacker Eryk Anders, now fighting out of Champions Freestyle in Birmingham, gears up for his third MMA bout as he takes on Eric Nunnemaer of Clarksville Fight Club in Clarksville, Tenn., in a light heavyweight match-up.

“We have been working very hard, all year to bring this event to Nashville, there are some really big fights in prospect – it promises to be quite a night. There is huge hype going on about this fight and this is a real prominent Nashville debut for Extreme Fight Night.”

“Nashville Extreme Fight Night” is a fully seated event, with VIP tables and full service food and beverages available. Tickets are available at www.xfnmma.com or at the door the day of the show. Doors open at 6.30 p.m. CT, with the first fight taking place at 7.30 p.m. CT.