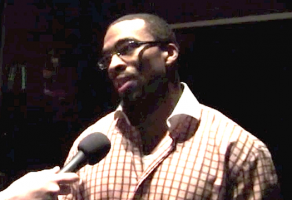 ProMMAnow.com (www.prommanow.com) reporter and Fisttacuff Radio host Anton Skoro recently caught up with UFC vet Gerald Harris (19-4) to talk about what he has coming up in the near future. Gerald has his eye on eventually winning the Dream middleweight title but is taking it one fight at a time for now and hopes to fight on a One FC card in April. He discussed being friends with both Rampage and King Mo and how he deals with being in between their bad blood and also made some predictions for his opponents in 2012. A big whattup to Gerald’s grandma’s baby daddy too — heard she real cool.