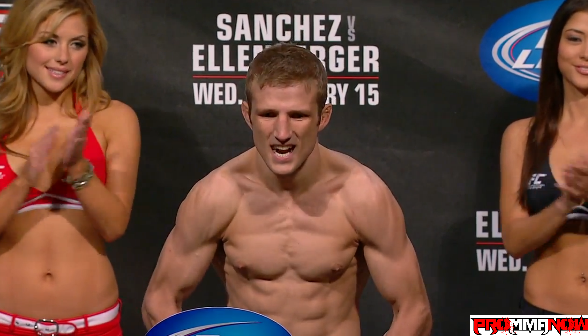 T.J. Dillashaw promised that he would run right through Walel Watson, and that’s exactly what happened as the Team Alpha Male product ran away with a one-sided unanimous decision victory with scores of 30-25, 30-25, and 30-26.

Dillashaw started the fight with a superman punch before securing a leg and looking for a quick takedown. Watson defended nicely at first, but Dillashaw remained diligent, dumping Watson to the mat. Watson scrambled back to his feet, but quickly found himself back on the canvas after a slam. Dillashaw dominated the action on the ground, seamlessly transitioning between dominant positions. After threatening with a rear-naked-choke, Dillashaw took a dominant full mount position after Watson rolled out of trouble. He then went to work with big left hands to finish the round.

In the second, Dillashaw changed levels, but instead of shooting, he uncorked a looping right hand that found it’s mark. After shooting and getting another takedown, Dillashaw went back to work, easily avoiding the submission attempts of Watson who looked to be more aggressive from his back. Again, Dillashaw was able to get to a dominant position and rain down elbows and big left hands from the top. Each time Watson rolled out of trouble, Dillashaw was able to take his back and work for a choke.

Watson came out in the third looking to establish some sort of striking by leaping with a flying knee that missed. Dillashaw remained patient after a front kick from Watson, then used another right hand to set up yet another takedown. Watson was able to get back to his feet quickly, but soon was fighting off another takedown attempt. This time Watson secured the head of Dillashaw and went for a flying triangle. Instead of locking up the submission after hitting the ground, Watson chose to throw strikes from his back, giving Dillashaw the space he needed to slide out of trouble. Once again, Dillashaw transitioned between full mount and the back of Watson, alternating between landing strikes from the top, to going for the rear-naked-choke.

After the bell sounded on the bout, it was evident that Dillashaw was on his way to a one-sided decision victory. The performance proved that his debut loss in the UFC was clearly behind him.

“I put that fight behind me and continue to go forward,” Dillashaw said. “I Use all these fights as a stepping stone to get where I want to be and that’s a championship baby.”

The victory gives Dillashaw his first win in the UFC, and moves him to 5-1 overall (1-1 UFC).

The loss for Watson is his second consecutive in the promotion, and drops his record to 9-4.