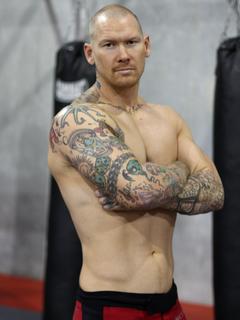 This Wednesday longtime So-Cal MMA veteran Sean “The Destroyer” Loeffler (25-5) will make his UFC debut. After more than a decade fighting as a professional, the 29-year-old Loeffler will face Jackson’s MMA middleweight Buddy Roberts (11-2) at UFC on Fuel TV 1 at the Omaha Civic Auditorium in Omaha, Neb.

It has been a long time coming for Loeffler, who not so long ago had almost accepted fighting in the UFC was not going to happen for him. Then he got the call. “January 8th at 7:58 a.m.,” he said. “It was the biggest day of my life besides the birth of my daughter. …  It’s funny, it’s like when you reserve yourself to accepting what could be reality, bam, I get the phone call I’m in the UFC. So, I’m just so blessed and so happy this is happening to me right now.”

The fight will also mark Roberts’ UFC debut. Loeffler was not familiar with him before the fight. “I had no idea who he was,” Loeffler said. “I knew when I Googled him the only Buddy Roberts that came up was a WWF wrestler back in the 80’s and the name of a cop in an Arnold Schwarzenegger movie.”

After doing some research on Roberts, Loeffler feels good about the match-up. “I think it’s a great fight for me,” he said. “I found out pretty much everything there is to know and am very confident in the match-up with this being my first fight in the UFC. He looks like a decent wrestler, he’s pretty well-rounded and he comes from a good camp. But that’s pretty much the extent of it.”

With Jackson’s MMA having developed somewhat of a reputation of point-fighting, especially after last weekend’s Diaz-Condit fight, Loeffler said, “My cardio is insane. If I have to run around the ring like Nick Diaz and chase somebody I will.”

If Roberts does choose to stand and bang, Loeffler predicts only one possible outcome. “If he trades with me I’m bringing home an extra $65,000, or whatever it’s going to be, towards my house payment,” Loeffler said.”To be quite honest nobody trades with me. If they do it’s a good time for me, you know.”

With the experience advantage going to Loeffler, he feels the first-time UFC jitters are definitely going to play a factor with Roberts. “He comes from a great camp and he’s going to be talking to Jon Jones, if he even knows who the hell he is, and he’s going to be trying to get his jitters out and by Greg Jackson telling him, ‘Hey this is what you can expect.’ He’s gonna feel like he’s got his jitters out in the gym and he won’t get those, but the fact is I’ve fought on worldwide pay-per-view like eight times, I fought on HDNet live, I fought on NBC live in a Bellator main event. He’s never had any big show experience. So just because he’s part of a camp that is the most renowned camp in MMA, that ain’t gonna wear off on him. It’s still his experience, his fight. He still has to deal with all those demons I don’t have to deal with. He can act prepared and feel great and so on and so forth and say it’s not going to bother him but reality will set it. I know how it is. I’ve been there. And once reality sets it, that’s right about the time my right hand will set in.”

Sean would like to thank: 02 Trainer, HeadRush, Ground and Pound Fight Gear, 03 Tattoo Hermosa Beach, Q Sports Bar & Grill in Oceanside, Crossfire Media, Backstage Cargo and The Compound in Oceanside. Last but not least, Sean said, “Every fight is for my daughter.” Follow Sean on Twitter @SeanLoeffler and on Facebook.