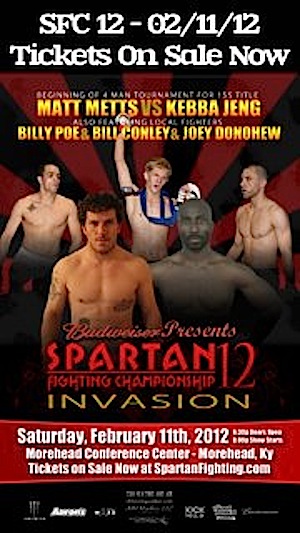 Spartan Fighting Championship looks to build off of their recent success and branch out beyond their home base of Ashland, Ky.  After much hype and fanfare SFC makes its debut in Morehead, Kentucky on February 11th with a night full of local talent and some high level professionals. Three professional fights are scheduled as well as two highly competitive amateur title fights.

On the pro side the card is headlined with Reaction MMA standout and undefeated amateur fighter Tyler Voth. Voth’s 7-0 record and dangerous striking made it a challenge to match him up but local professional Jason Carrier stepped up to fill the slot in the main event.

Team Jorge Gurgel fighters Chris Mierzwack and Taylor Ruscin look to showcase their skills against tough opponents. Mierzwack is back in action after losing a decision to Dom Steele at Strikeforce back in September and is hungry for a win. Ruscin has been out of action but has long been touted as one of the toughest fighters at JG in Cincy.

Morehead’s own champion, Billy Poe (7-4) defends his middleweight belt against Steven Bell. This is a rematch that saw Poe getting the split decision victory last summer. “Wild” Bill Conley (7-o) of West Liberty will defend his featherweight title against Blayne Hodges (5-1) of Vision MMA.

The Morehead Conference Center plays host to the event. SFC 12 will also be shown live via Internet pay-per-view on GoFightLive. Here is a look at the fight card as it stands, subject to change. For more information visit www.spartanfighting.com