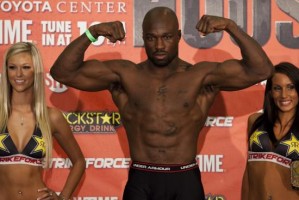 “King Mo” Lawal was a guest Monday evening on Inside MMA on HDNet to discuss his positive steroid test following his first round TKO win over Lorenz Larkin at “Strikeforce: Rockhold vs. Jardine” on Jan. 7. From all appearances, Lawal has been extremely open and transparent about the situation and explaining the reasons for the positive test result. The Nevada State Athletic Commission will hold a hearing next week to decide what punitive actions should be taken against the fighter.

Lawal tested positive for the anabolic steroid Drostanolone and has discovered it was apparently one of the ingredients in an over-the-counter nutritional supplement that has since been discontinued and taken off the shelves. Rather than file an appeal, Lawal and his management plan to file an answer with the commission to explain why and how the banned substance ended up in his system and to try and show there was no intention on Lawal’s part to cheat or gain an unfair advantage over his competition.