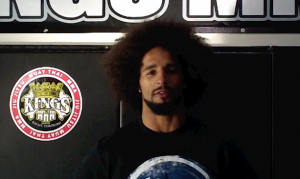 ProMMAnow.com (www.prommanow.com) correspondent Dan “The Wolfman” recently caught up with TUF 11 vet Jamie Yager following a training session at King’s MMA. Yager discusses his upcoming fight at Superior Cage Combat 4 next month and his move to welterweight. Yager also talks about working under Master Cordeiro, the progression of his complete MMA game and what he has been up to since appearing on The Ultimate Fighter season 11. Fans can follow Jamie Yager on Twitter at @The_Chosyn_1.