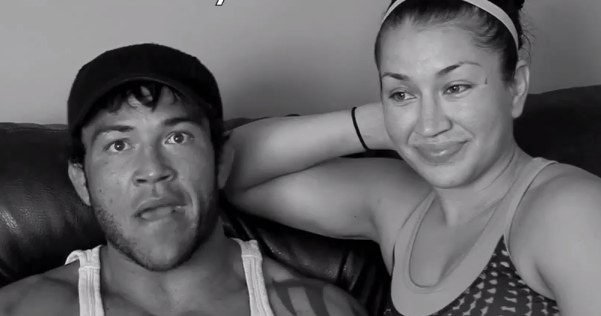 Being a mixed martial arts fighter, who happens to be married to another MMA fighter can be a blessing or a curse. When two people, who are very different with their ideas, upbringing, belief systems, and emotional baggage, come together in a sacred union it is difficult enough trying to make the marriage work.

But for those couples who are both involved in the fight game learning to balance their life as a couple and as fighters can be extra challenging. It is a lifestyle that can create stress, tension, jealousy and instability in the marriage.

Couples must deal with traveling, days away from each other, criticism from fans and the media, groupies, shady managers, struggling finances, injuries, family responsibilities and other day-to-day stress factors.

However, on the flip side of that, marrying someone who knows what you’re going through and understands the training, discipline, hard work and dedication needed to succeed in this tough business can also help strengthen the union.

Profiled below are three MMA couples who prove that being married and mixed martial artists has been beneficial to their relationships.

Jorge Gurgel and Zoila Frausto Gurgel met in March 2009 when they were at the same gym in Vegas. Zolia, sporting a short black and pink skirt, got Jorge’s attention. “Hi, I like your skirt,” he said. And the feisty Zolia responded, “Maybe I’ll let you borrow it sometime.”

That fire, plus Zolia’s attractiveness, peaked Jorge’s interest. But when he saw her fight, Jorge knew he wanted to get to know her.  As time passed Jorge and Zolia’s relationship blossomed  while carrying on a long distance relationship; Jorge lived in Cincinnati, Ohio, and Zolia lived in Fresno, Calif.  It wasn’t long before the two MMA fighters tied the knot in a private ceremony in Cincinnati on February 19, 2011.

Zolia, aka “The Warrior Princess”, is the current Bellator Women’s Champion at 115 pounds. She holds a fight record of 11-1.

Jorge was on the second season of The Ultimate Fighter television show.  Since then he has fought in the UFC and in Strikeforce. With a professional record of 14-7, Jorge, who is a black belt in Jiu-jitsu, currently competes as a lightweight for Strikeforce. The couple trains at Jorge Gurgel MMA Academy near Cincinnati.

Randall and Lacey “The Ladie” Schuckman practically knew they would marry even when they were kids. They have known each since they were little and they’ve always been best friends. At age 15, Lacey moved in with Randall, who was 18 at the time. Today, Lacey is 23 and Randall is 26-years-old, and their marriage is still going strong.

After a few years of preparation in MMA they both started competing in 2006. Although Randall is still an amateur fighter, he looks to turn pro in the near future. Lacey is already pro and she has a fight record of 7-4. The couple both fight as flyweights (125 lbs.).

Making their home in Lakewood, Colo., Randall and Lacey run a small gym called The S.H.O.P. in Denver.

Professional MMA fighters Evangelista Santos and Cristiane Justino Venancio Santos, who both share the nickname “Cyborg,” have been married for five years. Hailing from Brazil, they were friends who jogged together, and eventually started dating, which led to marriage.

Renowned for her excellent striking and aggressiveness,  Cris moved from her homeland of Brazil because she beat all the female MMA fighters in her division and there was no one else for her to fight.

Moving to the United States, she made her MMA debut in 2008. When Cris defeated Gina Carano on August 15, 2009, she became the first ever Strikeforce Women’s 145 pound Champion. She currently holds a record of 10-1, 1 NC.

Evangelista has fought as a Welterweight and a Middleweight. He has a professional record of 18 wins and 15 losses and currently fights for Strikeforce alongside his wife.

Zolia said before Jorge she basically didn’t have serious relationships because a guy just couldn’t understand her dedication to the sport, the long hours of training, why she had to eat a certain way, etc.

But since Zolia and Jorge deal with the same issues when it come to training for a fight – like cutting weight, the physical pain from training, handling disappointment after a lost, traveling and being away from one another – they never have to explain anything, which makes it much easier for them.

Pressure for a married couple can also take the form of controversy. When controversy strikes it is always good to have your spouse in your corner to help you get through it. Take Cris for example, who recently had to deal with the backlash from testing positive for steroids.

As the Strikeforce women’s featherweight champion Santos defended her title on December 18, 2011, when she fought Hiroko Yamanaka. She demolished Hiroko in just 16 seconds in the first round.

However, her victory was tainted and short-lived. Santos’ win over Hiroko was overturned and ruled as “no contest.” Cris defended herself when she stated that a dietary supplement was the cause of her testing positive for an illegal performance enhancement drug.

Despite Cris’ cries of innocence The California State Athletic Commission suspended her license for one year and fined her $2,500.

Let’s face it, most MMA fighters will never make millions of dollars per year. Many wide-eyed fighters work hard to try and become the next Georges St. Pierre, Anderson Silva, Tito Ortiz, Jon Jones and other champion UFC fighters, who earn millions per year through fight fees, sponsorships, and endorsement deals.

However, the majority of professional mixed martial artists will never even make it to the UFC, much less become a UFC champion. Instead, most will end up struggling financially, and some even have to keep a regular 9-to-5 job.

Being a married MMA couple only doubles the pressure when they rely on the money they earn from their bouts. Plus, unless a fighter is in the UFC or Strikeforce they don’t get insurance coverage. This can present a problem for fighters who get injured during training or during a match. It happens all the time.

Recently, during a training session, Zolia tore her ACL (Anterior Cruciate Ligament), which are tendons and ligaments that help stabilize and support the knee. Not only will she be unable to train or fight for an undetermined amount of time, but she also lacks health insurance. To help pay for her medical bills and surgery, Zolia had to resort to soliciting funds from the public.

The Schuckmans have also felt the financial pinch. In fact, Lacey made the decision to turn pro after R + L Painting, the company she and Randall owned for three years, went under due to the recession.

Before Cris fought Hiroko in December 2011, she had been absent from fighting for 18 months due to a contract dispute. Unlike people who hold regular jobs fighters don’t get unemployment or disability benefits when they don’t or can’t work.

Secrets to Making it Work

Since exchanging vows, the Gurgel’s have been enjoying married life. They say they make a point of keeping the negative energy out of their marriage. They realize with being MMA fighters they have to deal with being in the spotlight, negative comments from fans, other fighters and the media, etc. But Jorge stated they are solid as a rock and nothing can get between them because the two of them are most important; not their fight careers.

Jorge also said he and Zolia have what they call “comfortable silence.” When one of them is training for an upcoming fight, the other partner knows not to bother him or her. But just knowing they are loved and supported is what’s really important, even if there is silence in the room.

Zolia agreed and confirmed,“It’s great to have someone who you can look to for support, guidance and positive re-enforcement.”

Randall stated being married to Lacey is definitely a good thing. “Its good because I have a 24/7 training partner. It gives me another person who understands how I feel, someone to vent to when I’m frustrated, and that pushes me to keep going and never quit.”

Although Cris stated  that it can be difficult at times in the marriage because she and Evangelista spend so much time together, either at home or when training. Still she also believes being married to another MMA fighter is a plus because they are always in each other’s corners with support, love and encouragement no matter what they have to endure.

2 thoughts on “Couples who are MMA fighters: How does it affect their marriage?”