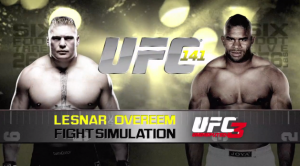 Out of the 25 simulated matches, Overeem came away with the slight edge, with an official UFC Undisputed 3 prediction of Overeem winning by first round knockout.

The simulation showed Lesnar attempted 287 takedowns in 25 bouts! Two of Lesnar’s wins were by submission via arm triangle (a la Shane Carwin). And Overeem scored a knockout in 92% of the matches he won.

Watch the simulation video below for more facts and statistics from the 25 matches. Remember, UFC 141 takes place next Friday, Dec. 30, and UFC Undisputed 3 for the Xbox 360 and PS3 hits the shelves on Feb. 14.