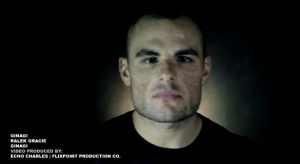 There have been quite a few people from the MMA world who have at one time or another tried their hand at music, and honestly, most of it has been fairly sub-par… but 26-year-old Ralek Gracie may just be the exception.

The undefeated MMA fighter (3-0), who is the son of Rorion Gracie and the nephew of Royce and Rickson (and the brother of Rener and Ryron), has been producing music for over a decade but is just now dropping his debut album entitled “Ginagi”. The entire album is completely written and produced by Ralek.

The BJJ black belt will still compete in martial arts, no worries there, but from the sound of this new single he is clearly talented as an entertainer and artist as well as a fighter. The full album “Ginagi” is now available on iTunes for $9.99.

If you like the video and/or the music, let Ralek know what you think by dropping him a message on Twitter at @RalekGracie.

Here’s the album cover for “Ginagi”: