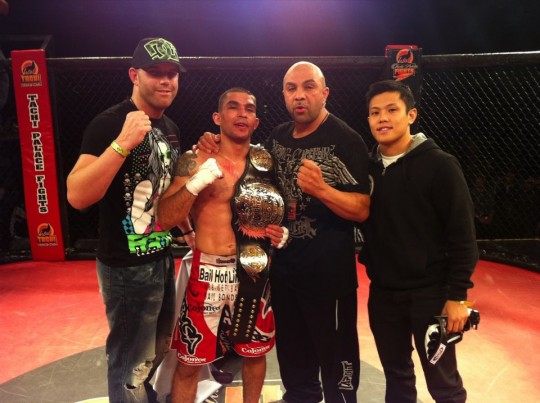 I did it! I know that all you guys watched the fight so there’s no need for me to give a play by play of the fight. If you didn’t see the fight you can still find it on sherdog.com (or here). Anyways, this blog I want to talk about my coaches who helped me prepare for this fight and win this belt.

Some people don’t consider MMA a team sport, let’s face it when you fight it’s just you vs. the other guy, but you do need a team of people to help you get ready for the fight. In my eyes I had one of the best team of coaches helping me. Each coach played a crucial role in helping me win the fight, no one was more important than the other.

After the second round ended I walked to my corner a little discouraged, I mean I just basically got beat up for two rounds. I sat on my stool and heard the advice that Gil, my striking coach, was telling me.

He told me that I needed to use my jab to come in, “Double jab your way in, this guy can’t fight backing up.” He also told me, “You’re down two rounds Uly, you have to win the next three.” Gil kept on repeating that I needed to work my way in and stop backing up. “Use your jab and make the mothereffer back up. Don’t back up this round!”

After Gil gave me his advice I turned to Sim my grappling coach and he told me what to do next. Sim basically said, “Once you back him into the cage you can take him down. Don’t shoot in from far away because he’s stuffing your shots. Close the distance and take him down.”

Everything that they were saying made perfect sense, but at the same time it’s always easier said than done. After he gave me that advice he said, “He’s exhausted Uly, you’re in shape you got this.” I looked over and sure enough he looked pretty tired and I still felt pretty good.

I trained hard for this fight. Sean Spees, my strength and conditioning coach, got me in real good shape for this fight. We knew that this was going to be a dog fight so we prepared the best that we could.

At times I didn’t want to train with Sean because I knew how bad our training session was going to suck. Sean is the type of guy that will push you to your limits and when you think you’ve reached your limits he pushes you a little further. We were about to start the third round and I still felt fresh while my opponent was starting to fade.

The third round started and I took the center of the cage and backed up to hear Gil yelling at me, “DON’T BACK UP!” Once I heard that, a switch in my head must have clicked because I started to come forward.

I came in and used my double jab to close the distance just like Gil told me to do. Once I closed the distance I got a hold of Cody’s legs and brought him to the canvas for the takedown.

I took him down and went for one of my favorite passes. I like passing to the “weak side”, the right, but I couldn’t because the cage was blocking my way. I went to pass towards the strong side when Cody sat up for a single leg.

As he sat up I jumped on his neck for a guillotine, a sequence that Sim and I have been drilling this whole camp. I thought I was going to get the guillotine until Cody fell towards his hip; I ended up coming on top in the mount position with the guillotine still locked in.

A few months ago Sim went to Marcelo Garcia’s gym to train and they showed him how to finish the guillotine from the mount. Sim showed me and while I was squeezing Cody’s neck I remembered the adjustment that Sim taught me.

I made the adjustment and I kept on squeezing and once I felt Cody tapping I left go. As soon as I let go I fell to the floor and thanked the Lord for keeping me safe.

As much as I would love to say that I’m the man for winning the belt and this and that, that’s not how it is. Yes I won the fight BUT if it wasn’t for my corner and the great advice that they gave me between rounds the outcome of the fight could have been different.